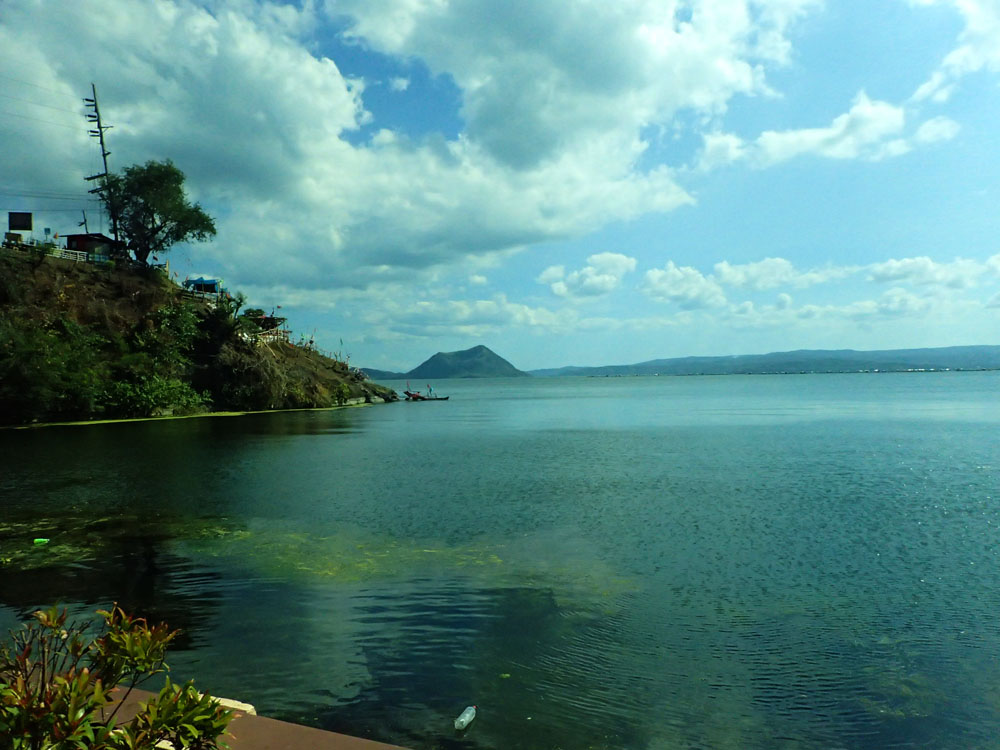 OR THE FILIPPINOS LOVE THEIR KARAOKE

The Metro Manila was lovely. Sheer luxury after the very rough and very ready of the island. I was blessed I decided, no more primitive shit for a while, Princess Rebecca was back with vengeance and she deserved a treat. A swim and a cocktail by the pool (mochito) then a quick shower and to the roof bar for a glass of wine and a yummy treat (smoked salmon and cream canopies) in their Sky Bar. The view of the bay was spellbinding and as it got dark the notoriously busy roads made for a very pretty light show. Oh mad, mad Manila I won’t be with you long. After a time gazing out the window the weariness from the messy days travel hit me, and off to my room I went.

Bright blue glorious skies in the morning and the decision to go to Lake Taal around two hours by car South of Manila rather than a cave temple and a craggy cliff where bodies of ancestors hung from the side. Both appealed but the shrines were less accessible and I wanted a tranquil lake experience. Talisay Batangas would be a perfect antidote to island dwelling for a bit.

After a quick swim and a breakfast outside the hotel, I had a wander, nothing much to see so I went to take some final pics from my room and to repack my bits I had washed out the previous night. The luxurious bathroom had been too good and opportunity to miss for a luggage clean too.

Top Tip: Always use a good bathroom to catch up with laundry. If you’re travelling very light as I do generally it’s a good idea to empty all your bags and use the hotels body wash to rinse out stuff to make it more fragrant again. Pongy bags can be a source of embarrassment too. Give then a good wash or wipe as well. Tech stuff can also get the treatment with a barely damp cloth especially on their cases. There will be all sorts of much all over them and it’s wise to let them have a bit if a clean. Psychologically this can also be a huge booster to morale and unclutters your brain.

Arriving at the Lake.

My guest house was right on the lake and the view as we drove round the lake was glorious. As I stepped from my car they were at the gate to welcome me and the place was so cheap considering it had a pool and such a fabulous view. I would find the beds rock solid however and the shower room very primitive (hose and bucket jobby) but the air con was great as was the WiFi and the TV had wonderful American crap on that I gazed at mesmerised after a month of being without some kind of junk TV. Unpacked and ready to go and explore the beautiful gardens I wandered down to another greeting from the very smiley owners.

They wanted to know if I was eating dinner there and if so what. It was a choice but really adobe chicken or adobe chicken with potatoes and recommended each night. They needed to know as all food was brought in fresh, very fresh. Indeed that very first afternoon I saw the owners son coming down the hill on his bicycle holding a hapless chuck by its legs flapping its wings wildly. A wicker basket with salad veg and herbs was attached to the back. The fat chef pointing at my approaching very alive bird shouted ‘Your dinner!’ grinning happily, I grinned back queasily.

I sat in one of their wooden chalet like huts and drank a lot of San Miguel Lite while looking at the magnificent volcano. The beautiful manicured gardens made this place a haven of peace and beauty and I was blissful about my choice. That idea would be rudely squashed the next day for I had at the weekend and the karaoke machines would be out with vengeance. See: HORSE RIDING UP A VOLCANO TO SEE IT’S CRATER LAKE IN THE PHILIPPINES.

Caged fighting cockerels were next to where I was sitting and the owner rushed up to tell they were his prize winning birds. Another thing I didn’t know about the Philippines is they also love a good old gamble on cock fighting. This and karaoke were the main obsessions I came across. (Apparently people are murdered if they don’t sing a song right. They had to ban ‘My way’ on machines as for some reason it made some people incandescent with rage and killed each other which is a phenomenon called ” The My Way Killings”) Both their beloved sports would be a source of terrible noise and no sleep the next two nights and I would curse my naivete.

However for the moment however, peace reigned. Then I was called to my solitary dinner (for they had no other guest blissfully at that point) and it was absolutely delicious. Juicy adobe chicken with a fabulous gravy, earthy potatoes and tasty carrots. I think that they tasted so good must have been to do with the rich soil in the area and of course the chef had done more than justice to my freshly slaughtered chicken. This was the first really wholesome food I had in the Philippines. For me everything is super sweet. I was to find this further down this neck of the woods as I travelled on to Borneo and Indonesia. Although I love their noodly stuff with sauces and meat with sauces etc they often they add a lot of sugar to the actual sauce so you don’t really get to identify the actual food only the sauce. I’m sure everyone will be annoyed with me but the lake food was the only good fresh food where it’s ingredients sang out. Their breakfasts also were more tasty, no doubt because of all that fresh organic chicken. They also made their own bread the usual sliced fare is also tooth curdlingly sweet, so beware.

And here’s how to make it. Basically, you marinate the chicken briefly, sear the chicken, then simmer it in the pan with the marinade for 25 minutes. It will look watery right up until the last few minutes, then becomes thick, simples. You can have it with rice but I loved the more country style spuds and carrots.

Sated after my fantastic adobe, I climbed the stairs to my room, after booking my dawn boat for the volcano, and contented and chilled at last had a really good kip till those pesky cockerels and the neighbours contently barking dogs woke me in good time for a speedy breakfast and off to my volcano adventure. In that part of the world you might want to check about noise from other travellers reviews. It really can kill an otherwise fantastic experience

Next time I take you up the volcano by horseback to the acid lake crater and moan on about karaoke parties after!

OVER AND OUT FROM A WEARY BUT RELAXED OLD BIRD.