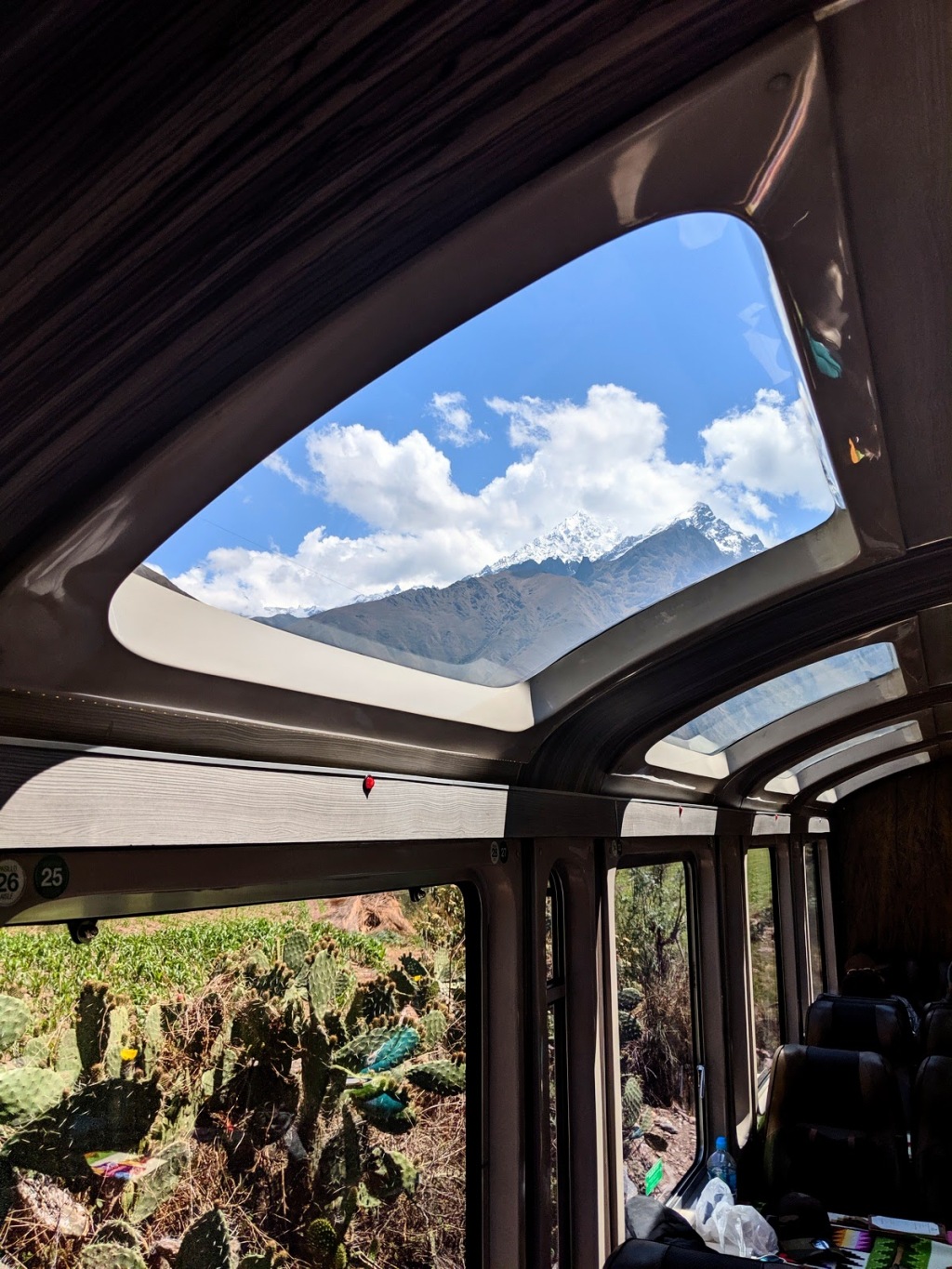 OR HAND MADE COCKTAILS ON BOARD CHOO CHOO!!!

The big day has arrived! The big trip to “that” famous bucket list place. The high on citadel of the Incas. Machu Picchu, bit for now the train rides there and back couldn’t have been more different.

The gods just won’t give me a break. Went to my lovely new hotel up on high after catching a couple of museums and lunch at a fabulous little restaurant where I had soufflé with a stuffed chilli pepper inside, and inside that a llama bolognaise! This meaty cheesy eggy wonder was a great moral booster as I’d been feeling like Typhoid Mary again with my travel luck. So my trip to the station with a taxi had to be another source of stress. I woke up feeling pants. I blew my nose and blood came out and I had started coughing.

Tired and grumbling to myself I got into the cab and we started reversing down one of Cusco’s very narrow streets. Then tadahhhh, on cue a huge rubbish truck blocking our way. Now I’m a cheerful chappy but this was the limit. I had thoughts of having to run down the terribly steep streets (probably falling over and breaking something) and still missing my train. After a lot of shouting and a local throwing a plastic bottle at us we managed to negotiate a deal and finally after hanging precariously at the edge of an abyss we passed and continued reversing down the said street. At this point my bowels felt uneasy.

SIROCHE OR ALTITUDE SICKNESS. I promise this is not princess syndrome it’s the malaise of the mountains along with sheer fatigue. It’s well to remember it’s very thin air here and really steep streets. They even have oxygen at the hotels and in the shops. I fondly thought of my minty oxygen back home. The ubiquitous coca tea helps but so does slowing your pace. Some people get cracking headaches, stomach pains and even vomiting. Shortness of breath goes without saying. I found sudden crushing tiredness was my particular bete noir. All I can say is it’s all worth it once you acclimatise. By the way, it’s high in Bogotá too and I never even noticed it at all although it’s notorious for it!

Finally arriving at the station I found it to be small and pristine as were the trains (mind you they should be at the kings ransom they charge) and after visiting their lovely loos four times I now, am on the train with my second cup of coca tea and feeling a lot more my normal self. They’ve even changed my seat to forward facing and the sun is shining, all is well with the world !

I love trains. Looking out at the mountainous view I’m feeling very glad if this journey and blessed by the bright blue Andean skies. Carving into this rock here reveals an indigo colour beneath. As to plants I’ve seen a lot of eucalyptus so far. Looking out from the window mesmerised I remember fondly of my Trans Siberian railway trip and how I do love trains!

Ooh I hear the sound of cutlery chinking are they going to feed us too?! Yes! And apparently on the way back we have a fashion show too! The darlings! This is more like it! Eccentric like me😂😂😂

Arriving in Aguascalientes the town of Machu Picchu.

I didn’t want to get off the train. There, you have it. I had been so happy and well catered for and it was all without stress and wonderful I had managed to forget the last chores that lay ahead of me.

On disembarking I speed walked (a fellow passenger hot on my heals) to the bus ticket office knowing everyone on the train would probably be heading there and soon a huge queue would form. Smugly correct at the beginning of a rapidly forming queue I got my return ticket (mind you do get a return if you go , the woman was only going to give me one way and as I found out later there’s a terrible one at the top for all the people who change their minds about walking down.) Then found my modest hotel up the hill from their little Plaza.

TOP TIP: Aguascalientes is a small tourist trap-hole of hell. Everything is overpriced as they know you cannot escape, and they mercilessly rip you off. For me it was particularly loathsome as it is surrounded by the sheer mountains that I would so love when on top of them the next day. Your stay here will be whirlpool of brash but well meaning Americans, arrogant French, and spacially unaware and shrill Japanese. All the nationalities I generally love but they can be very tiresome tourists and very few are there to absorb atmosphere. Just go to the chalet style restaurant over the river where the river drowns out the nonsense and even though it looks pricy is the same cost as everywhere and MUCH nicer. Gather your thoughts as THE FINAL RIDE TO THE PEAK WILL BE HAIRY.

Night Train Back to Cusco.

Funny reading this now I’m on the returning train. The exhaustion is so great for all passengers on the train, which left at at 5.30pm, that most fell into rapid slumbers. Some had done the dreaded one day Machu from Cusco (the guy next to me) and others had done my version arriving yesterday and going early to the site. Either way we all are sick with exhaustion and struggling due to the fact it’s dark now. Travelling is always harder in the dark hours.

I knew that we were due a fashion show of the dead llama kind but I DIDN’T know that we were to have a truly shocking warm up act. One of our train crew had dressed as a folklore creature of the netherworld, one that had to make a snarky laugh and trill from time to time as he shuffled along the aisle. I was very jolly when he dragged up a women from her seat for a hideous dance with the nasty little trilling noise, that was until he arrived at my seat and picked on me too. Totally exhausted and desperate, I still made the effort but I think you’ll hear me muttering “Oh god” before my assault by foul creature.

ALERT: MACHUPICCHU NEXT POST. After the long journey I finally arrive. If some of these following posts are a little “off the wall” it’s because I have been dizzy from the altitude, high on Pisco sours and mad with the huge number of places visited!!!

OVER AND OUT FROM CHOO CHOO REBECCA X