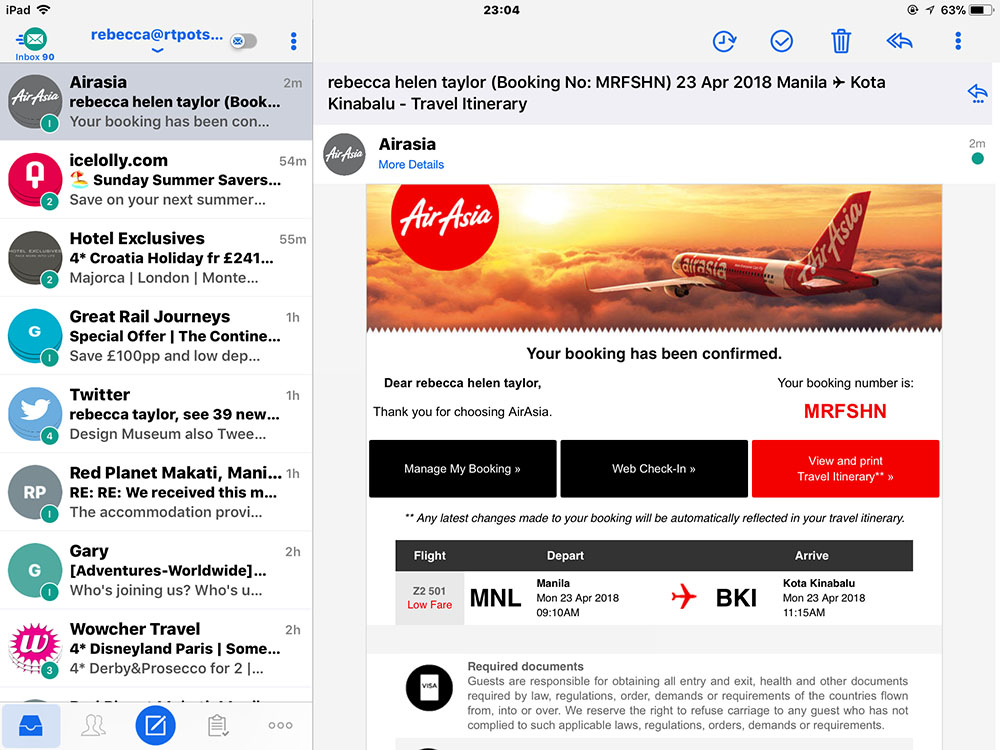 OR LEAVING INDIA AND FINALLY ON MY NEXT LEG OF MY BIG TRIP.

Alert: Parts of this are a bit shouty screamy!

I had allotted two days in Bangkok before hitting the Philippines. Not quite sure why, only because, maybe I had loved Thailand so much before. Well realistically, Bangkok is a bit pants in comparison to the rest of Thailand. I arrived with great hopes only to feel a little deflated when I arrived.

Now old birds do like a little familiar break to unruffle their feathers and re-evaluate any coming storms and difficulties in new territories, a nice comfy nest in a known area if you will. How could I forget it’s quite a noisy, busy place for this purpose? And it was pissing down. The traffic in Bangkok is horrendous at the best of times, but in the rain at rush hour? Grim fucking grim.

I arrived in my cheap and cheerful Woraburi Sukhumvit Hotel and took a bit of a dislike to my room so had it changed already alerting the desk I was a tough old bird and I wasn’t going to be palmed off with a shit room. After that there was a lot of hostile frostiness and I felt myself growing gloomy. The hotel wasn’t cheap and cheerful, just cheap. Bad news. As it was late in the day I just got a light meal and sat on the outside terrace, listening to the rain plopping down on the table umbrella and drinking their very fine mojitos and planning the next day. I would just go in wander mode and check out the park near the hotel. I knew I needed an early night as I was feeling a bit blue and missing India. I had to go break my plummeting feelings cycle in my room. In my space.

Top Tip: When the blues hit you you have to revert to the usual suspects. Hit the bottle a bit then go watch some downloaded comedy (I had downloaded 30 Rock and Veep) Having a laugh and sorting your luggage are very centreing along with a shower and hair wash. Be kind to yourself. Also the stress of travelling can open you up to any bugs and viruses. You need to take a deep breath watch a bit of Netflix os something similar. I always take some over the counter Sleepeeze or whatever suits you. Bach Remedy is good for some people and homeopathic medicine can also be helpful. You need to gauge a sudden dip in your mood, it’s usually because you’re tired and/or stressed so you need a good kip. Audiobooks are brilliant as you can feel as a child being read a bedtime story and they normally lull you to sleep (along with the sleeper) with these rituals at hand you can calm any feeling of being overwhelmed by it all. They are your tools. Remember everything is better in the morning. Night night x

The next day I woke feeling a lot better. Also it had stopped raining and the skies were a dazzling blue. Walking up the street from the hotel there was little to see so I went off piste behind the hotel and walked to Lumphini Park and pretty as it was I wasn’t feeling the love. I was killing time. When you’re older it is unwise to kill time as you don’t know how much you have left. I mean you should never waste time throughout your life but as you get older it becomes more valuable before you peg it. Now we all know I,m never going to die. but for the rest of you use it as a precious commodity because you will die unless you’re a god like me!

So as I walked along motorways and saw the stark contrast of poverty near the railway tracks and under bridges as opposed to glittering towers of the new city I felt shit again. Lumphini when finally I arrived was beautiful, but you know when you’re in a bit of a mood even that greenery doesn’t scratch that itch. I wanted out of Bangkok.

Hanging around for that late flight.

By the end of what turned out to be a long frustrating day of little pleasure I went back to my extended stay room at the hotel only huff and puff, sigh and groan, fidget and build up stress for want of getting to the airport and get on with my continuing journey. It had been a mistake coming here a second time. I had stayed by the river last time and even then I didn’t really like the place but it was MUCH better than this fucking area. It was a kinda no-mans land. Kinda beige. I’d been by the river and gone to a floating market at the other place and there was a market street to wander around at night, buy Thai elephant trousers and silly T shirts, get a bit of tasty Thai street food and go for a drink and people watch. This place however was dreary. I went back to the hotel restless. I had hours til the plane but I was bored and fidgety so I left for the airport.

I arrived already exhausted and hung around charging my crap and blearily gazing at the departure notices screen ‘It’s nearly time not much longer now’ I kept saying to myself. That was at 10 p.m. I walked around again huffing and puffing. Normally I was in beddy by now. I checked the board again and the plane had been delayed til 1 a.m. ffs. What next I thought grimly and suddenly in a very psychosomatic way felt so exhausted I wanted to throw myself to the floor and sleep or scream and cry. I was starting to have a very bad feeling that the plane would crash. I felt panic mounting for no real reason.

I think this is because I’m a drama queen and also have a bit of a Princess syndrome. I like things to go smoothly and effortlessly. If things start spiraling out of control, I do believe that things will never stop going wrong. I can’t just say okay I’ll just be late only see no end to the chaos. In this case I was right it all went very shitty.

Getting finally to the gate to check in they asked me for my ongoing ticket which obviously I didn’t, I always wing it and I never before had been told I need a proof of leaving the country before I fucking get there! This bitch was out to get me. I looked around panicking I was one of the last at the gate. She told me I needed to have proof of outward travel (POOT.) That I would have to buy a ticket before boarding and show it to her so she could put it into her computer which until then was saying no.

But I don’t fucking know where I’ll be going, I don’t travel this way I wander freely. I book as I’m going along. I am a FREE SPIRIT” I whined, now even disgusted by myself, to the now decidedly frosty bitch from hell.

‘You’ll have to book one now or you can’t board the plane’ She snapped.

‘Well I don’t even have an idea of where to go. You tell me where I should go?’ I said genuinely blank as where to go.

‘Kota Kinabalu is lovely you’ll like it there but you’ll have to hurry the plane will leave soon’ She said, and seeing that people had started to give me sympathetic looks tried to smile and pretend to have any empathy for the human race.

Out came my IPad and with bloodshot eyes and shaking hands i managed to get the airport WiFi and book a ticket from Manila to Borneos beautiful KK. The bitch looked impressed she never thought I could do it in time or at all. I triumphantly showed her the booking, put away my credit card and my trusty IPad, and staggered off to board the plane. Bangkok had been a foolish idea.

Arriving in Manila, Another Nightmare

Alert: You will have these ghastly days while travelling you can’t avoid them. That’s why my continual mantra is always fly in the morning. Any delays at night are catastrophic for your onward travel plans. Also flying at night means it’s dodgier when you arrive for getting a cab. It all leads to many complications and errors.Also check out my POOEY POOT post that will explain that you need to have POOT in a lot of countries I also got caught out in South America it cost me a fortune You can go on line and there are companies that can sort this for you at a fraction of the cost with a ticket that is proof but not real (my German friend told me about that and many people swear by it but I’m old school and that would make me feel uneasy) So, if you don’t want to do that you should invest in a cheapo throwaway flight. Also flying at night means it’s dodgier when you arrive for getting a cab. The whole day was a mess and I can never relax during the day if I’m flying late I’m too anxious so it makes no sense to pretend I will enjoy a ‘nice lunch and a siesta’ It would and does make me hysterical.

Of course on arrival at Manila it was the early hours of the morning so I promptly got scammed by an airport taxi who not only overcharged me but drove me to the wrong Red Planet Hotel.(Fantastic chain of no frills hotels) Once the mistake was realised on both sides I had to wait for another taxi. I had been right about that day. I would later realise there was more foulness to come so it was hardcore for a while.

It never ended being shite but at least the plane didn’t crash.

OVER AND OUT FROM A PANTS DAY.

ALERTS AND TOP TIPS FOR SOLO TRAVEL. ANIMALS AND PLACES OF NATURAL BEAUTY. GALLERIES, MUSEUMS AND ARCHAEOLOGY. HEALTH AND SAFETY. HOTELS AND TRAVEL. JOURNALS OF TRAVEL SOLO TRAVEL FOR WOMEN