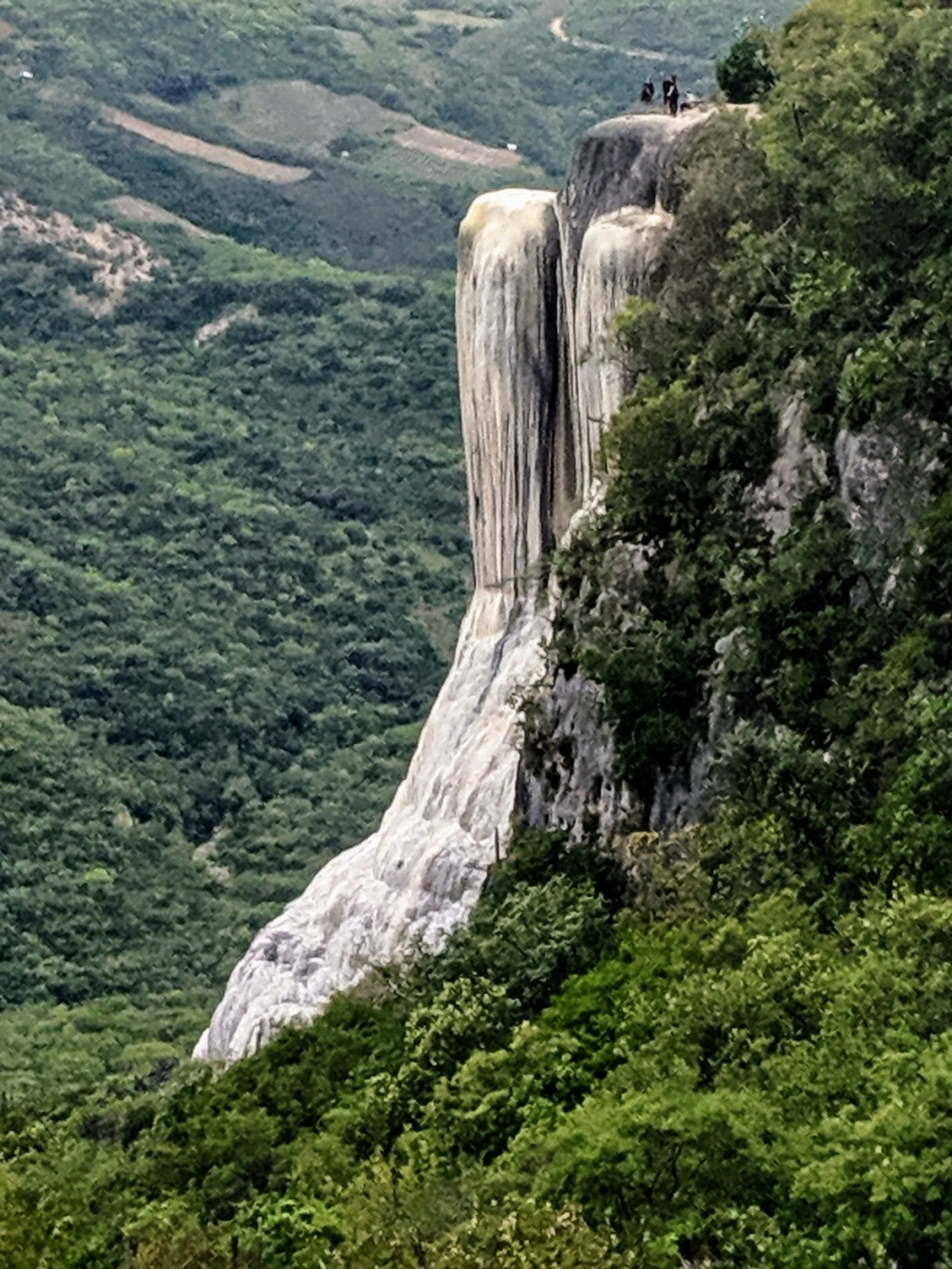 Or infinity pools in heaven.

Alert: this was posted ages ago but now fits in sequentially and bears a second look at. I am updating it as I was in a rush before and this place would go on my top 10 list of places to go in the world!

I’ve jumped the gun as usual and this is out of order I’ll get you all confused!

I first arrived in Cancun from Guatemala stayed one night using it as transit, then I went to lovely Mérida where I buggered my foot by falling off the bathroom step (most accidents happen at home!), in agony I pushed on to Villahermosa (Hermosa means beautiful which was a bit of a lie) to see the huge stone heads there had a barney with my first hotel and walked out to move to the Marriott which had an AMAZING deal, languishing there to go to two sites, then flew to Oaxaca via Mexico City (another drama with the connection) and finally have arrived here. Here is Oaxaca and it’s the real deal.

Quick note on walk to and from Bus Terminal.

I want to jump to yesterday when I made the tough journey to Hierve de Agua. With a slightly less balloon like foot I staggered to the bus terminal in the morning with a German couple as I was getting jumpy about going to the rough area where the bus terminal is. We didn’t know but later went through a very dodgy area then finally into a street which was lined with prostitutes and their pimps with brillianteened hair slicked closely to their heads, gold teeth and stereotypical leering faces of those attached to the profession. The different toned whistles up and down the street were obviously codes for “stupid tourists coming up your was, mug them” or something similar. Music was blaring and I was trying to disguise my limp, the girls were stonily staring at us so I went into some weird mode after muttering to my German friends “we are going to die” and starting smiling at them and singing along to the music. It actually worked, but really Rebecca?

Anyhow I digress. In the morning we got there after a long walk on the potholed pavements and streets and got the bus to Mitla, a bargain at 20 pesos for over an hours bus journey and I managed to get the seat behind the driver and put my gammy leg up on his platform so happily gazed at the scenery.

The next bit to get to the famous petrified waterfalls was a collectivo through the mountains This beautiful but terrifying ride with a very old driver who insisted on pointing out stuff as we hurtled along spitting slightly through his gnarly stained teeth as we all cringed in our seats, knowing that we were going to plummet down the mountain to our deaths.

Arriving there was a relief and walking through the jostling stalls setting up for the day I parted company with my German friends and walked down a steep path to the pools. Turning the corner a breathtakingly view appeared, it was surreal and heavenly. All pain forgotten I gazed around with my gob agape. If you ever go remember a towel. It was cloudy and chilly when I was there so I only paddled in the mineral rich water which appears vivid green and some rivulets are dark red as if the mountains were bleeding.

Just don’t be flash and go near the edge, some prick nearly fell to his death while showing off!

Or “Place of the Dead”

With its pale green and rose pink hues the church a wonder built from stolen blocks from the ancient site. The temples with their unique design weather the rape of their old buildings with dignity and power in their striking remaining carvings.

Altho my German pals were hiking I was keen to go to this very unique site so, all on my lonesome got the collectivo back. The young driver insisted on checking my foot telling me his mum was a bone doctor, and he manipulated it to my horror but proved to be expert, nothing was dislocated (as he firmly pulled all my toes and massaged my bloated corpse of a foot.) he then recommended marijuana cream and we all went merrily on our way.(Marijuana cream seems to be popular in Mexico!) Arriving in Mitla I grabbed a tuktuk to the site and for the second time that day was ecstatic. A very different style and tombs for me to climb down into.

Tuktuk back to town where I arrived at the bus station to the amazements of my Germans and another couple who seemed to recognise me (famous!) I smirked and said I’d made it there and breezily crossed the road to buy a ham toastie and a beer joking in Spanish to the guy there. I, of course, was showing off.

The Spanish ransacked the blocks from the ancient monument temples to build their own religious shrine. Merciless in their vandalism throughout the Americas as other colonists have been over the world, stamping out jealously indigenous belief systems to imprint their own.

Here we see on the other side of the church the old remains of one section of the ancient complex.

We made it back on the most crowded bus I’ve ever been on. At one stop the bus driver said no to a couple of school kids who just ran to the back of the bus and clung on to whatever they could standing on the bumpers laughing and swearing.This added to the merriment and laughter and cries of “no more, no more, it’s full it’s full!” every time it stopped and people still tried to cram in. There were complaints that people could no longer breathe. We all thought it was a great joke. When I say all, I mean the people with seats.

The different route back meant we had to walk through the red light district to end a perfect day! (See above)

ALERT. It seems either my phone or charger or both have died so posts might be more about Guatemala. Any idea who does Google bloody phones in Mexico?

OVER AND OUT FROM A PETRIFIED REBECCA.