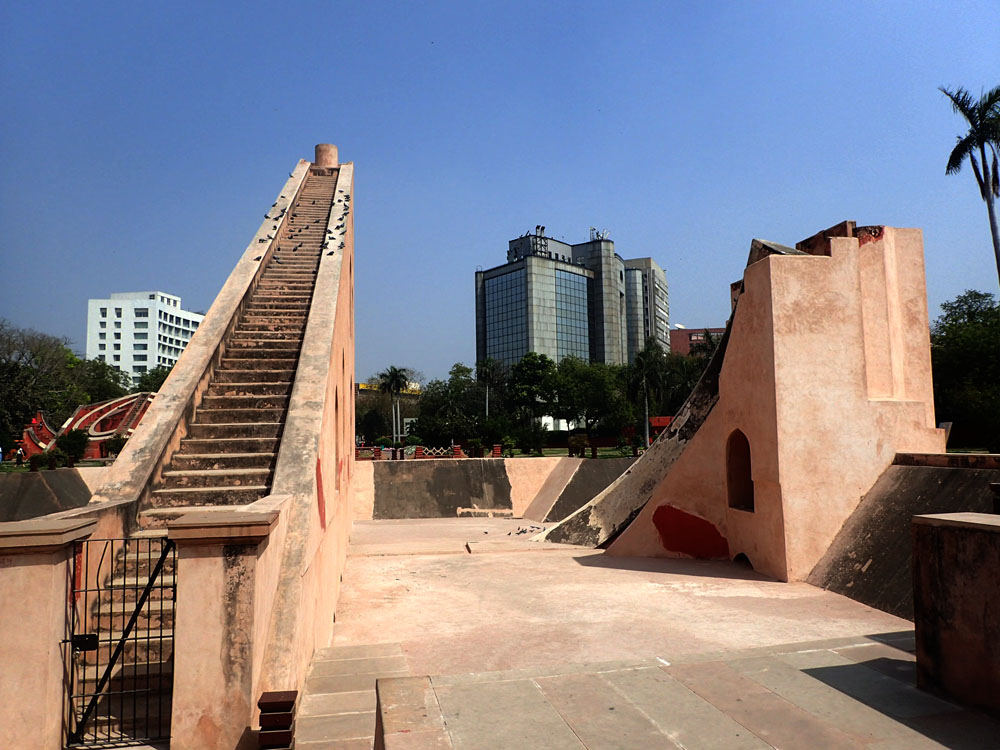 OR COME WITH ME TO DELHI’S NATIONAL MUSEUM AND ‘JANTAR MANTAR’.

Looking out of my window from the Park Hotel I had spied a fantastical playground of abstract curved and jutting structures, some with stairs reaching to the top and all painted in tan and blood red. I had driven past it on my first day and and saved it for my delectation today my third day in Delhi. I had planned my trip to Jaipur for the following day so had planned to go just to Jantar Mantar. I literally had to walk over the road and in the searing heat that was a blessing. I had had a swim after breakfast but as soon as you stepped out of the pool you dried off in two minutes. Luckily I love heat.

Shower to wet hair then long shorts and a shirt and my loyal trusty cap. Then a dash over the mad Delhi streets to view close up the bizarre and beautiful huge sundials and astronomical ‘instruments’ built by a stellar dreamer Mughal emperor Muhammad Shah, who allotted the task of re-examining the calendar and astronomical records to Maharaja Jai Singh II. These timepieces are accurate. The main purpose of this observatory was to compile astronomical tables and predict the time and movements of the sun, earth and planets. All the observatories have a large array of astronomical instruments used to study the heavenly bodies. The Jantar Mantar of Jaipur has the largest stone sundial of the world.

The Misra Yantra composed of five different instruments is unique to Delhi. Five similar enormous observatories were built in five cities including Jaipur where I also went to later. Upon entering the park you can see that here as well, conservation has started, and slowly the structures are being lovingly restored. Although there are occasional explanations of the accuracy of these strange beasts and how they changed the text books with their amazing new concepts, there is little information as to the actual ways this was achieved. I suppose the great thing is that this is the most visited place by the intelligentsia who are more bright than us. Each day I am proud of these people.

Now these stairways to heaven are sublime, clearly they were for the astronomical observations however, they appear so abstract especially with flocks of pigeons repeatedly landing on the upper steps. I believe that’s why India captures the imagination for most people, you repeatedly have spiritual moments all over. I did at the Mughal Palaces, the shrines, the mosques and temples, monuments and landscapes. With their wildlife and of course with their people.

I had been in a daze the previous day when I took pics from their National Museum so you’ll have to excuse my woolly pics. Maybe this is a good thing if sometimes that you’re not a slave to your camera. On checking their site it is one of the largest museums in India and my was first stop when I arrived. I’ve looked at photos of the artwork online and in my album and I remember clearly as if it were yesterday. Sometimes one has to just absorb and be present, I can remember it soothing my soul and opening the door to their art and history for me. I had gone to the British Museum before leaving and it was a huge help as a lot of the pieces were familiar after seeing the fairly extensive Indian collection there in London. They start from pieces from their ancient history up to modern day pantheon of gods and goddesses. It’s very large and very full much like the rest of this magnificent diverse culture and country.

A Small Selection of Pics

As you might know from before, this old bird is very keen on as ‘ancient as possible’. These artefacts are as old as I feel today and some of them even look like me at the moment. However this particular gallery will bring a tear to your eye with its collection of ancient toys. To imagine the little hands lovingly playing with them, seen across the millenia, laughing with joy maybe even having fights about who should have a go next. Also the larger hands that lovingly made these things for the then, apples of their eye.

Top Tip: You can’t see it all. Although I had to sacrifice large sections with the beautiful Mughal miniatures and and the Buddhist Artifice Gallery (holding sacred relics amongst other priceless artwork), manuscripts, coins, royal collection, armour etc I cherry picked for my interests which at this point in my journey I was rather an American tourist. There even the mature art of travelling ethos to this, you have to be picky at points in your trip where you have limited time! For example here and in Vietnam I only had two week visas so I needed to be strict with myself. In China it was more fear that hastened me to the Terracotta Army in Xian and out of the country that I had wanted to spend a lot more time. As usual it’s adapting on the hoof when you decide your priorities and it’s important. At more leisurely sections of your travels, when you have more time, you can be more fastidious, maybe revisiting a place and really lolling around and not be hectic mad person. It’s quite nice to have these changes of pace though, as this way there’s never a dull moment!

OVER AND OUT FROM A STARGAZING OLD BIRD