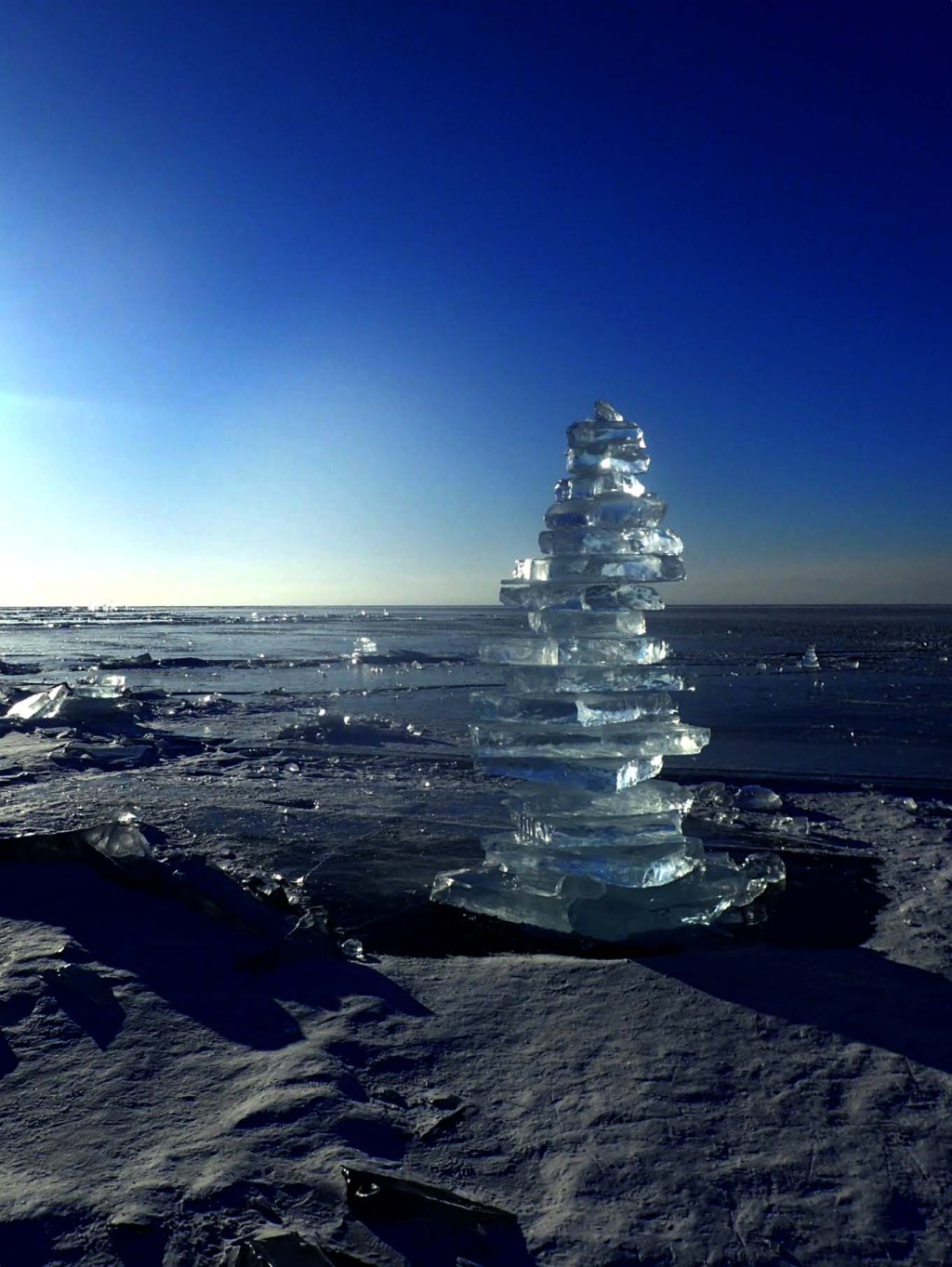 Cautiously getting off the train in the early light of a freezing Siberian morning in February, I immediately saw my name on board clasped to a mans chest. Seeing as I was the only person getting off he stepped forward to grab my little suitcase and drive me off to Listvyanka on Lake Baikal.

I was completely adapted to train life after three and a half days on board the Trans Siberian Express and this was like being dragged from your warm nest into the big bad cold world. I felt vulnerable and anxious, already having withdrawal symptoms. I was now in Irkutsk and in an hour would be at my hotel at the lake, I hoped I would adapt. It would be difficult for a train nerd, indoctrinated to an eternal life on the tracks. In the hour it took to get there I started buzzing, seeing all new possibilities in this new landscape.

Before I continue these are the true colours as seen at the time. They have not been enhanced at all!

LAKE BAIKAL. The largest fresh water lake in the world (about the size of Belgium)

It has the purest and most transparent water in the world and also is the deepest in the world.

IT HAS 1455 SPECIES THAT YOU WILL NOT FIND ANYWHERE ELSE. IT IS ALSO THE OLDEST LAKE IN THE WORLD!

Hangover completely gone with the clean, bitingly cold air, and the amazing light and sight, I rushed out onto the lake. I can’t tell you the absolute beauty of the lake. I was totally gobsmacked by it’s size and the fact it was frozen solid! All the turquoise bits that look like water in the photo above are ice! This is the total transparency of the ice. Look at the little people on it in the photo, they are not walking on water! Breathing my first breath outside the hotel was a shock of bitterly cold air entering my lungs,and seeing the colours and light in such high contrast made it all feel like an alien planet.

My hotel, Hotel Priboy, was total Loony Toons! Décor nuts, and really antiquated but strangely cosy and they did an amazing job restoring my filthy, manky train clothes to their former glory. I suppose they really are a summer resort, indeed there were few people there, so I think that nobody notices the very odd arrangement there the owners however are lovely. I loved my room despite it having hideous armchairs, a very ancient T.V. and strange heated wall hangings on the wall next to my bed. The view however was fabulous. I had the prime view of it in all its cruel blue its magnificence.

However it’s when you get on the lake that’s when you really understand the size and how the freezing takes place. There’s sort of a buckling at the edge where the water expands when slowly becoming ice somewhat like some kind of glacier.

Then there’s the deep blue ice with bright whites fissures and faults running through it that you can gaze into for hours. I’m going to make you lot a video of it, as I took so many photos, and couple it with some pretty music!!! And finally the ice sculptures made from big chunks cut from further out. They have hover boats that go out for ice hole fishing which I didn’t fancy. I was too much the child sliding on the ice and looking at all the artwork!!

Two days whizzed past with just that for pleasure. Again Real Russia had been right about stopping here!

” Lake Baikal is an ancient, massive lake in the mountainous Russian region of Siberia, north of the Mongolian border. Considered the deepest lake in the world, it’s circled by a network of hiking paths called the Great Baikal Trail. The village of Listvyanka, on its western shoreline, is a popular starting point for summertime wildlife-spotting tours, plus wintertime ice-skating and dog sledding. Area: 31,722 km²” Google.

Gas hydrate is a solid compound of gas and water. One cubic meter of gas hydrates, when slightly warmed up, can produce up to 160-180 cubic meters of natural gas! That’s why gas hydrates are called the fuel of the future.” quoted from http://www.todiscoverrussia.com which is a fantastic website for all things Russian!

Apparently the weather there is always nearly perfect due to its geography, and I can say that the two days I spent there it really was perfect! The light is quite amazing with all the bright blues and whites making me realise I should be wearing sunglasses due to the sheer brilliance! This perfect weather however includes the bitterly cold Siberian wind which, as I found out the following day, is fine if you have your back to the it! My Russian military coat was perfect as usual but upon turning back my slightly uncovered face started hurting really badly even with me rubbing it vigorously (and pinching it in an alarmed way!) I had to make a pit stop when finally I found an open cafe. The man there said the purpling of my cheeks was a precursor to frostbite. This beautiful punishing place. I’m glad I went in winter, in fact I’m so glad my whole trip with the Trans Siberian was at a time with so few tourists.

The little shop where I picked up some local biscuits (really delicious with a cuppa tea) had a peculiar mixture of goods and the people were charming just like the tiny mostly closed market still punting some tourist ware. They had a couple of simple restaurants there with BBQ fires outside that served yummy meat with sliced onions and chili sauce. Although I had been keen to go to the restaurant down the road on the last night it had become so dark I felt a little nervous so had a small dinner in the hotel then slept a huge and wonderful slumber.

So, back into Irkutz tomorrow, away from this magical place, and ready to have a look at the “Paris of Russia”.