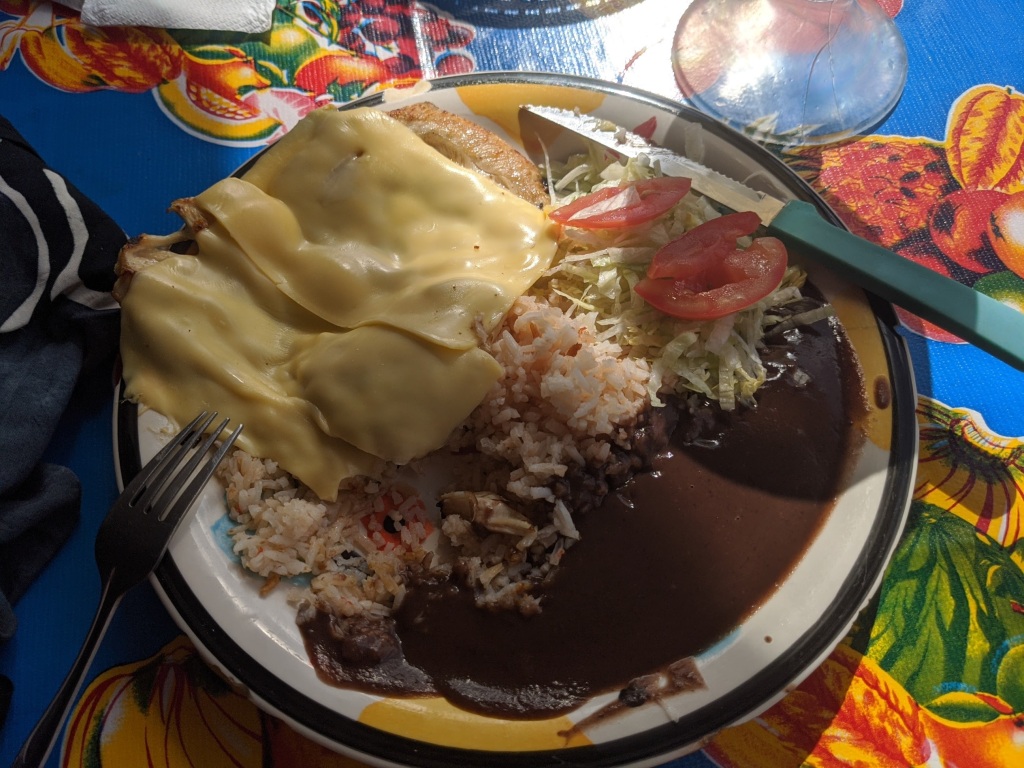 OR A RUFFLED AND BEDRAGGLED OLD BIRD MAKES IT!!!

I can’t even tell you how wonderful it is to be here after the trauma of the trials and tribulations of travelling at the moment. Firstly for the people I met en route and you old birds I can be contacted at REBECCA@RTPOTS.COM. I will be adding to this later today.

The preparation for this trip was exhaustive and exhausting. Three or four times I have attempted to leave but expected the difficulties to lift so delayed my plans. Mistake. Slowly but surely things became worse and I could see that if I didn’t go NOW I might not be able to leave at all. I was right.

Firstly I found that BA is only flying direct every Friday, they required a PCR ‘test’ and the price had gone up yet again for premium economy and business class. Now, as I found out, only the first is true. The guy on the phone from BA told me although Mexico required no test or quarantine, the airline did. This made for an extremely stressful two days before flying as you don’t get the result from the extremely expensive Government approved private doctors until the following day, vaguely between 3 and 8 pm. The test set me back a whopping £180 and as it transpired I might as well have flushed it down the toilet. The results however did come in early and negative so by one o’clock I was able to feverishly book my ticket to Cancun and feel absolutely overwhelmed by the enormity of what I had just done. My Stockholm Syndrome started kicking in. Why had I done this? The police would surely send me back and I would have spent two grand on an escape never to be. I would give satisfaction to all those who nowadays frown on freedom of will. I would be proof that you should just bloody do as you’re told. I took a Valium and drank half a bottle of retsina till my lovely neighbour came by and talked me down from the ceiling. I was flying the very next day and it was surreal.

Final packing and whimpering were to be done for the next hours till I went to bed, heart thumping and in danger of having a fit. I slept for four hours and that was it. I got up switched off relevant sockets and had a quick check round to satisfy myself that all was ship shape and orderly then off to the bus stop I went saying goodbye to Soho for the duration.

Bus perfect, train perfect, blue skies and good omens until I arrived at the airport.

Firstly they are only working from the North Terminal so you are signed posted off to the shuttle stop as their train wasn’t ‘working’. Cabs eagerly awaited the travellers who did’t want to risk waiting on the shuttle buses and a family were booking one and invited me to jump in. So wonderful meeting like minded people in times of duress. We arrived and I followed more signs and after leaving the lift turned around the corner straight into the arms of two big policemen in full regalia of the now omnipresent stab jackets, cameras, handcuffs and basically all the bells and whistles. The new baseball caps and masks they wear add to the threatening demeanour. They pounced on me and started the interrogation as to why I was travelling.

I had lucked out as it transpired later as most people had just the one female officer who was really pleasant but mine? They wanted their pound of flesh. Bullying and very scary the bad cop came in on me. Why was I travelling? I had my book mock-up ready to show them but then they complained that my name wasn’t on it so I showed them my blog and made it very clear that it was indeed me in the the photos, and alone. Still the bad cop pressured me. Why did I have to go now? This was spat out as if I was scum of the earth. Why could I not wait? Also did I not know how dire it was in Mexico and everyone was dying there? They could see I was exempt from wearing a mask, and although they were not able to ask me why, they could say that it was foolhardy of me to go in a metal tube with no proper ventilation, if I had a condition, for 11 hours. They had been watching this very flight for a week , the inference being that they would ensnare all the liars whose travel was not essential. Or in a more sinister way they had me on facial recognition from my being on peaceful protests at the start of this crisis, while it was still legal and I was clearly someone to be squashed. The pressure only alleviated for one minute when I told good cop he had lovely blue eyes.

I find this very disturbing that an aging solitary woman would be picked on and intimidated in this way by two large men when clearly a female border policeman was around and surely would have been more suitable. I think these forms of behaviour will be scrutinised in the future for surely the police have been shall we say, enjoying their new found position of power granted by our ‘government’.

Anyhoo, security cleared another shock was to meet my eyes when I turned the next corner, the airport was in essence closed. No currency exchange was open so bang went my buying Mexican Pesos and only a Boots, Smiths and Pret were peddling their wares. The departure board had only six flights on it and one looked like it wasn’t even going to make it. People were eerily quiet. No joviality, no chatting as if they were aware that essential travel was a very serious business and best not to be too obvious, too carefree. This indeed was a very scary space.

When gate was announced we trudged through and I re-met my new pals from earlier who had seen me being given the third degree so were pleased I made it through. Then out of the blue, sixteen border police swarmed through and went and stood behind the BA desks, sort of to attention. Luckily I was at the desk with my mast exemption letter from my doctor and my unnecessary negative PCR certificate and had already explained to them the police had spoken to me so she explained that to them as they arrived. I didn’t dare to look at any of them in case they decided to do it all over again. Everyone was ashen.

Finally on board I sat down still anxious especially when there was an announcement that engineers were on board checking something. We all sat there fearing that there was something wrong with the plane and we wouldn’t be able to ever leave. An hour later we set off however and I breathed a sigh of relief. The flight was fine and I settled at last and waited for bar service and got myself a large vodka and soda.

There were three forms to be filled for entry to Mexico and even this gave us all an unsettled feeling even though it was perfectly normal. The rest was really a breeze and because I was at the front of the plane I whizzed through immigration very quickly and was on the other side changing money in about twenty minutes!

Cab to my airport hotel took ten minutes and I was finally on some safe ground at the hotel I had stayed at when last I entered Mexico. I went to buy cigarettes and beer for my wind down on the top roof terrace. Now you would think I would have been euphoric but strangely this old bird was still fearful. I can honestly say that I have never suffered such a negative mood on arrival at a destination. A father and his daughter came up onto the roof and soon we were chatting. They came from Chile where there is a curfew and similar draconian measures to the UK and were truly lovely people expressing the same spiritual views as my own. Still however I felt as if I needed my space and made my apologies to leave and go to my room, not before I hasten to add, that this lovely man pressed a smooth onyx stone into my hand for some good vibes for the rest of my journey.

In my room a man next door was loudly conversing I think on his phone and I tried to think I would be able to suffer it, I was here for gods sake and should be happy. Then I notice my adaptor was of the wrong ilk and I couldn’t charge any of my devices. New hysteria ensued, this indeed was a bad omen. Sleeping now was to be an issue.

However my dear friends, I did resolve all these issues the next day. I booked my bus ticket to Tulum with ADO and after that all was plain sailing, the ride was lovely and by chance my hotel was right by the bus station. While having a quick ciggy outside a beaming face leant of the balcony saying, Are you Rebecca? My lovely welcome to Tulum and stress started peeling away.

I sit writing this account at the wonderful Charlies Bar next to my hotel. After a three hour siesta yesterday I had ventured here for the mojitos advertised outside. The owner Charlie is a lovely man who is also an artist which you can see reflected in this bar restaurant. It is designed and built by him in the style of Gaudi’s park in Barcelona and has a small art gallery annex at the side too. Having been starved of art, human contact and conversation for months it was indeed fabulous to be here. The man has a fantastic philosophy of life and it was like chicken soup for the soul having a decent talk albeit in my rusty Spanish. This did improve after two stiff drinks and I left after a couple of hours to my lovely bed and another long sleep.

Here again today, Charlie has just introduced me to a girl who is an agent and interested in my work. She is moving here from LA and has given me much food for thought. People are making radical life changing moves at this time to improve the quality of their lives.

OVER AND OUT FROM A MUCH HAPPIER REBECCA!