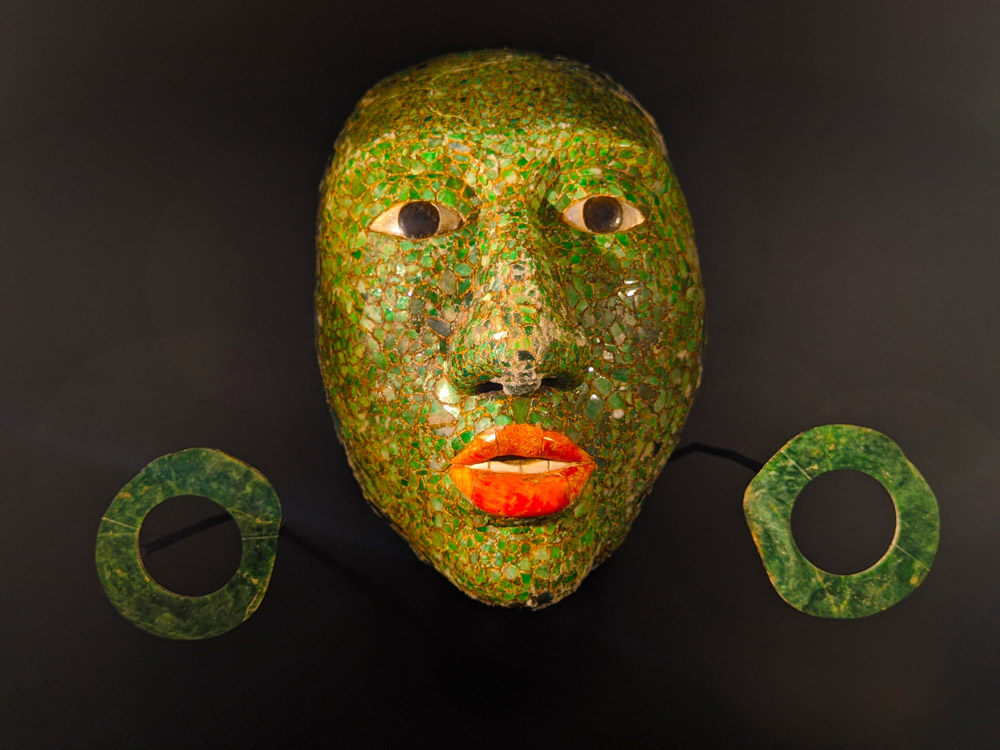 I even had low expectations that the museums would be open today but bliss! After a very good nights sleep I got up to a bright calm day and the museums I indeed wanted, were open. I went straight to the museum that has the very famous jade mask and oh what a treat. Beautifully curated and with a great atmosphere and lighting, the guards there said I should also go to the Archaeological Museum Fort San Miguel. One quick cab ride and I arrived at a fort with the courtyard rooms converted into a museum. They really have good gear here but again another spoiler was the boss kept saying my nose had to be covered and was jokey but serious. I was sweating and panicking but I wanted to see the fine collection there. I noticed other people with their noses out of the masks but I guess if you’re Mexican it’s ok. I’ve heard other people complain of this and it’s such a shame after the Mayan Riviera where they are just so much cooler.

This bad boy of a museum contains the Calakmul mask that had gone on tour for ten years, is made from jade,shell and grey obsidian. With its 57 jade tiles, two beads of obsidian and a shell. Funerary masterpiece of the Kaan dynasty, the nose and lips made in one piece. Jade was the essential part of funerary masks being as it represented water, sky and sea. this was a symbol of vital breath, fertility and rebirth. The white fang-like protrusions from the mask represent the breath. This was the last warrior king. Now of course it and all of the Calakmul trappings discovered are in museums so I was really pissed off when I got to the site, not one of my favourites unless you want to climb pyramids. Done all that in Guatemala and bought the T shirt, yes you have a magnificent vista of the jungle but seen one seen them all.

Here are explained the four Mayan styles and some well preserved and all authentic.

Here was another treat of jade masks and sculptures, pots and artefacts. The imagination and art of these people is breathtaking.

Campeche’s largest colonial fort, facing the Gulf of Mexico some 4km southwest of the city center, is now home to the most important of Maya museums, the excellent Museo Arqueológico de Campeche, the city’s one must-see museum. Here you can admire emblematic pieces from the sites of Calakmul and Edzná, and from Isla de Jaina, an island north of town once used as a burial site for Maya aristocracy. Much of the info is in English.

Stunning jade jewelry and exquisite vases, masks and plates are thematically arranged in different rooms The star attractions are the jade burial masks from Calakmul. Also displayed are stelae, seashell necklaces (much the same as I saw in Peru at Trujillo) and clay figurines. You could have even (using an interactive exhibit) viewed how you yourself might have looked as a Maya warrior but now they don’t allow such things. Shame I think I’d look really good as a fierce warrior, god knows I feel like one at the moment!

With a dry moat and working drawbridge, the fort itself is a thing of beauty. The roof deck, ringed by 20 cannons is a reminder of the the battles of old to retain their already stolen land.

Its mission is to spread a historical overview of the cultures of the Gulf and Central Highlands. Within its mostly pre-Hispanic collection, it displays ceramic utensils, obsidian and stone tools, topics of religion and funeral customs of the Maya during the period prior to the arrival of the Spanish, the famous jade mask found inside a tomb at the archaeological site of Calakmul, which I went to later to find a tad disappointing.

Other significant pieces are the plate with an iguana lid with a great content of religious ideas expressed in an iconographic way and the bowl with a lid in the shape of the head of the Black Jaguar or the Night Sun, both excavated in the Becan Archaeological Zone. Becan is also closed at the moment as I found to my cost.

I cadged a lift outside as there were no taxis, The heat by then was fierce and so gratefully I went back into town for the usual cold beer. I have missed museums so much and these had been so wonderful to heal my soul with such beautiful art of old, and to give me hope for the future. Across Central America I’ve seen that the indigenous people are trying to reclaim their heritage.

Anyway I’m just back from a very impromptu snorkelling trip and am feeling very heat strokey and burnt and exhausted so will leave you now with big kisses.

Top Tip : After all I tell you about covering your head and back while snorkelling I did neither as we were in a bloody rush I (only was informed late the previous night after having drunk some fab sangria and had a sangria popsicle for the walk home so had a hangover). If you are burnt and giddy you need to cool down your body but particularly your head. Take your cap and soak it in ice water then wear it for the next hour or so. It perks you up and I think literally cools the poor old brain and stops you from escalating in core heat. Works for me.

over and out from museum rebecca.