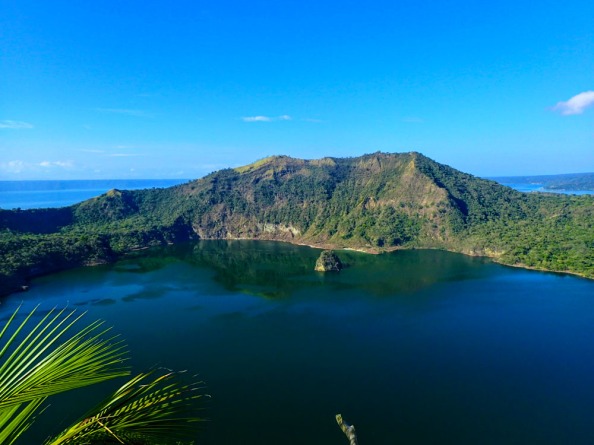 OR, FUCKING KARAOKE IN THE PHILIPPINES DRIVING AN OLD BIRD TO INSANITY.

OR, FUCKING CRATER LAKE HAS BEEN VAPORISED SINCE I WAS THERE DUE TO VOLCANO ERUPTING!

Alert: Like I keep saying to you old birds, live for the moment and get OUT there. Again it would seem I’ve been lucky about choosing my mega travel spree over the three years before 2020 and all it’s shit because in January last year Taal unleashed it’s fury again.It’s volcanic crater lake is gone now. Everything I wrote in my journal now has to be updated. There is a BBC video link below of the lightening and eruption. MY DARLINGS HIT THAT BUCKET LIST BEFORE VARIOUS DIFFERENT TYPES OF SHIT HIT THE FAN https://www.bbc.co.uk/news/world-asia-51083515

The Dawn Departure for the Volcano.

My dawn departure across this still misty lake with my very own ferryman was in itself a memorable adventure. Nothing like a bit of dawn light and a sunrise over water to get you in the mood for the day ahead. I had slept poorly due to a rock hard bed but more from over excitement. I’m like a child the night before Christmas wanting it to be morning so I can open all my gifts. The lust for the daily gifts of solo travel are much the same causing excitement but also anxiety. I always get a bit worried in case I miss something or it all goes wrong or if it’s a terrible anti-climax.

On arrival at the village at the base of the volcano I was ‘collected’ by my hotel owners mate, the usual thing of a skirmish of who’s to grab your money. As I walked up the beach to the entrance ducks were making their rounds in a long line rushing down the waters edge seemingly just let out for their morning dip. The odd goat came bleating out of the brush line and many rather sad looking horses were evident. The choice was this, walk up the hot volcano in what was now becoming an unbearable heat of the sun, or grab a pony.

The horse option was clear even though I have a dodgy knee and the deal was done. I got on what was a healthy looking beast, if only the size of a pit pony, and started the ascent. Although they start by leading you up the zig zaggy path you can actually be left to ride alone on the way down which is a lot better and you can actually have a little trot. The path is a little treacherous and from time to time you actually see steam coming out from a crevice on or near the path. My horse Dinky or Pinky or Leyla or something was bored of this game and sorta grumpy, but who could blame her? She was well fed and groomed and had thought that she would just be eating in the shade for fucks sake? I had chosen her because some of the others were a pitiful sight. Thin and mangy looking with unpleasant looking owners. I spoke with my young guide who told me that the owners are sometimes very cruel and don’t take care of their animals, it’s always so depressing when you see this animal cruelty while you’re travelling abroad (or indeed at home too.)

Anyway up and up a twisty sandy narrow path that periodically opened up to flatter terrain and fabulous scenery. I was loving it and not a twinge from my knee hurrah! Just one thing in my spaghetti western troubled me, there were actual crosses occasionally in view. Had tourists fallen off their horses and plunged to their deaths and been consumed in the acid lake? Was this locals who had been caught when the volcano became active? I never got an answer to this and I did ask. Anyone out there know the answer to this mystery?

My little pony reached the top in a very spritely manner and the guide took her for water and shade immediately On reaching the top I had dismounted and chucked water on my head, that heat! However it was worth it the place was breath-takingly beautiful.

I’m so sad that nobody ever gets to see it now. On doing my research just now, I discovered that it is no longer there due to devastating eruptions which vaporised this wicked lake.

However I walked around for an hour or so taking in the amazing scenery and finally went and got my horse for the descent. If I’d have known what I was risking I might have been a bit quicker with my perusal. The ride down was even more enjoyable as I was used to the horse and was allowed to take her off for a little run around on a flat part of the terrain. It felt very wild West and reminded me of when I was in Egypt and rode a horse through the villages then for a canter on the beach of the Nile. There was also in the Ivory Coast when I had to be on a horse for a fashion shoot and it would only agree to turn left for some reason so we danced in circles on the beach.

However I digress, having reached the bottom and re-met the ducks and horses now bathing in the lake after their sweaty exercise, I got in my boat and was off back to the hotel that had been such a paradise the previous day and indeed in the early morning.

The stunning emerald poison lake with its positively radioactive glow mesmerises. Its pH ca n be as low as 0.1 (very acid). It is very small as volcanoes go, but very unpredictable.

Thirty five eruptions have been recorded and in 1911 more than 1,300 people lost their lives.

“These new eruptions are taking place on Volcano Island, which sits inside Lake Taal, a 234 sq km lake formed in the caldera of an earlier massive eruption.

Volcano Island alone has 47 craters and 4 maars – volcanic craters that form when hot magma comes into contact with shallow ground water, producing a violent steam explosion. Other vents and eruption points are underneath Lake Taal.

The entire Volcano Island has been marked as a permanent danger zone by Phivolcs.”

Taal is defined as a “complex volcano” – it doesn’t have just one main vent or cone but several eruption points that have changed over time, this eruption was a “wet” one but now the lake inside the volcano has been vaporised the next one could be a “dry” one meaning that there would be no water droplets and the ash would travel much further and be more hazardous.

Well living on the Ring of Fire has always been a risky business. Now Philippines capital has to be on a permanent state of high alert. It would seem I went there just before it timed out again. Me and my little pony got there passing those crosses I mentioned above, now I know the answer to my own question, there have been many fatalities there and around the lake itself.

Apparently 147,000 people were evacuated as it shot up its plume and in a February report

With a plume more than a kilometre in the air, Manila airports flights were suspended due to the ash, and earthquakes rumbled around the lake too. Apparently eight tourists and two guides were half way back across the lake after a tour so that was a very close shave for them. I presume my pals and pony had their emergency plans in place as they had told me. Like I said while there I noted many steam plumes escaping from holes and crevices and was very aware that it was active.

Back to my Karaoke Story now!

Well clearly I got back safe and sound and in time for my adobe chicken lunch, disturbingly though my solitary state at the hotel had changed and there were children there, and a lot. Jumping in and out of the pool and screaming. I’ve done all the parenting and am so over kids now. People generally lie about this and give you sad looks but they just aren’t truthful. Children are only fun if they’re yours and then you need other kids to amuse them. When you are older and travelling they are a fucking pain in the arse.

I’m a bad tempered old bird when my space is invaded so I was already grumpy while having my San Miguel and lunch. I saw trestle tables being put up. Then a lot of women bringing covered bowls laden with food. All very jolly. I eyed them suspiciously and then the owner came up to me beaming.

‘We are having a feast tonight’ he explained happily.

‘So I see’ I said now openly hostile.

‘Please come we are having karaoke!’ Car doors slammed and some huge speakers were dragged down the driveway by shouting wildly excited men.

‘Oh fuck’ I said right at him.

That night was vile. Eventually around sixty people turned up and they filled all the spare rooms noisily and with much hilarity. Extra beds were hauled screechingly across tiles to accommodate extra morons all shouting at each other although in close proximity. Cars filled the parking area and overflowed onto the street and everybody knew best about everything. It was straight from Dantes Inferno (well it really was to be just a year later) and I felt all my good will drain from me and that peaceful Zen I had achieved lay bleeding at my feet.

Manic murderous excitement on the part of the children was amplified by huge doses of sugar in their brightly artificially coloured bottles of pop that they were guzzling. Everything was very shouty before even the start of the real party and the throats heavily lubricated for their bloody awful loud singing on those massive speakers.

Karaoke as I have said before is super popular there. (See MANILA AGAIN AND ONTO LAKE TAAL AND ITS VOLCANO). There have been some killings when there have been renditions of “My Way”. This eerie social phenomenon has been guilty of 12 men being killed and dozens seriously injured. In 2007 a security guard shot to death a 29 year old man for singing it ‘off key’. An official ban was put in place banning ‘My Way’ and tourists beware, ‘House of the Rising Sun’ can piss them off too so just don’t sing it. I personally get it, I would happily have killed all those lousy ‘singers’ that night.

They preened and smirked as they warbled dreadful songs in too close, to the microphones that they clutched as if indeed professionals. They screeched and howled as I pulled pillows over my head and whimpered, eyes hollowed by lack of sleep until four in the morning. This was exactly the time the cockerels started their morning chorus and they set off the dogs and I cried.

Next: Last look at the lake and off to Kota Kinabalu.

OVER AND OUT FROM A VERY ACTIVE VOLCANO.

My links for my life! Writing, travel, sculpture, ceramics, films, photography and modelling.

My Channel You Tube