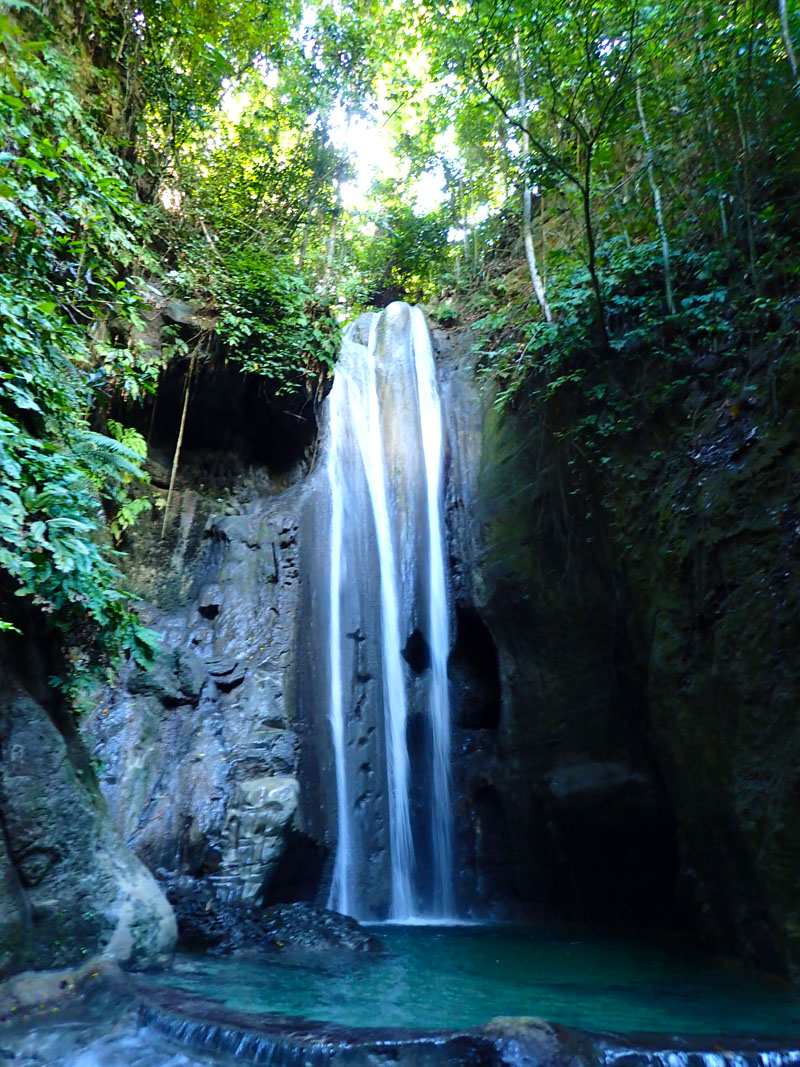 OR THE EARLY OLD BIRD CATCHES THE WORM. (OR WHALE OR WATERFALL OR WHATEVER)

A quick word on the decisions to be made about swimming with these beautiful beasts.

Excerpt from my diary Alert: I’ve just been reading about swimming with whale sharks. There are two camps on this. I personally think that the fisherman who started this wily business venture already has his love affair with these creatures. They come up to his boat for the krill and seem to hang around for a snout rub. This fisherman made friends with them ages ago and his business has given the locals a decent way of life without killing these gentle giants. The industry feeds the village now and there are no longer rotting carcasses on the beaches skinned and de-finned in the old barbaric way. Their beautiful spotted skins stay on their bodies and they are thriving, so now Their skin is no longer being used for handbags and the fins for some Chinese medicine to make a mans dick stay turgid or whatever, at least not around Oslob

There is also the side of the argument is that it’s interfering with the migration of these big boys and their natural instincts, and feeding ability. .However there are a lot that still go on their normal migration, just this lot have swerved that being more opportunistic.They become fat and lazy and domesticated. I get that but I think these days, that I’d just prefer for them not to be butchered on the beach and obviously they will be furiously protected by the village as a whole. Make of it what you will but I dread to think of their fate in these lean times.

Off to the waterfalls.

Zoom, zoom. Vroom, vroom on the motorbike and carriage straight to waterfall land and jungle After the whale shark swim I was salty and immediately had started sweating and overheating now the day had started in earnest. Soon cool jungle streams for a quick trek to the falls, that’s all I knew. I had chosen this spot as it was the nearest, but the idea was to go to the closest ones so I could…. yes you got it right, avoid the tourists.

Although I knew those stinky shouty bastards would be hot on my heels. we managed to get to the falls walk before anyone else thanks to my speedy Gonzales driver. In my haste, I left my trainers in the bike/car fingy so raced along in my Indian flip flops and oh dear me. They were fine for the walk through the jungle but as we started walking by the first sign of water I saw the problem I had and it was going to be a nightmare. You have to cross and wade through the jungle stream and these bloody shoes kept slipping both on the wet rocks but also on my feet. I whisked them off grumpily thinking that my feet are tough and I’d manage. No. It was a nightmare of slipping and falling, crashing and bashing just to keep up with the guide who now had quickened his pace.

It was like a horrible deja vu of Thailand trekking when I actually broke my toe trying to keep up with the guide after having stopped to take some photos and been left behind. I had run behind him and trapped my foot under a tree root that was concealed by jungle foliage. My big toe bent right back and I was thrown to the ground with a sickening crash. I grazed my hands and knees and knew I’d broken my toe as I’ve done it before. Bleeding and shocked I limped on behind him rubbing on some leaf he told me would stop the bleeding. Yeah right! I was not going to do it here.

We reached the first small waterfall with a swing over it made of rope and an old tyre. I was now feeling a bit whiny and pathetic but still took on the challenge of having a go on it. It looked a simple enough and jolly thing to do. My young guide showed me first and then I dutifully climbed on it and was given a surprisingly hard push by my young frail guide. Years of seething anger went into every time he pushed a tourist on the swing I am sure. I laughed wildly at first but then it showed no sign of slowing in momentum and my arms had begun to ache, I was woohooing but also noticed a whimper incorporating into the woohoo. I left it swing another two times then cried out in alarm and shouted “Stop this fucking thing!” which he did but it took a lot of effort to stop it enough for me to climb down so forcefully he had pushed it. I was cross and shocked (god I must be carrying a lot of weight since India for my arms to have been that feeble)

However there was further to go while my guide moaned on about life in general and that they had to take it in turns to take tourist groups to the falls and I was just the one person, at that he stared at me as if I had deliberately conned him into taking me and on my own.

The rest of the climb was uneventful but the breath-taking view on turning a corner as the noise of the pounding water greeted us was beautiful. Aquamarine almost glowing water which I gratefully dived into. The crashing water became deafening as I swam closer and the frigid water was so exhilarating that I gasped. In these falls and the deep pool, I felt truly cleansed and also the sensation was almost like a baptising if you will, a renewal of positive life force. If this sounds too hippy-dippy try it for yourself some time. As I meditated on this I felt completely rejuvenated.

We are born from a watery substance, and our bodies are mostly made of water. It’s no wonder, then, that we are drawn to water in all of its forms. Wallace J. Nichols, author of Blue Mind, has studied the effects of water, especially wild water, or water found in nature, on our brains. “Blue mind can be defined as a mildly meditative state characterized by calmness, peacefulness, unity, and a sense of general happiness and satisfaction with life in the moment.”

Being near or immersed in wild water gives the opportunity to set an intention of cleansing on all levels. Here are three rituals involving three kinds of wild water you might consider if you are feeling stuck or run-down:

So there you go! This is a very good way for a solo traveller to re-centre and destress. To calm and nurture your soul. I have to say that after whale sharks and a waterfall pool I was super zen and in contact with the universe, that’s why I need to get a studio by the sea it’s so much more conducive to art and serenity and ozone! Oh and you might want to look up ‘Misogi’ the Japanese Shinto practice of water purification. At my waterfall however you couldn’t put your head underneath or it would snap it off!

The Coastal Road and the House that Jack Built.

So much chicken soup for the soul walking back from the waterfalls and then vroom, vroom along that coastal road again, passing all sorts of crazy. Leaning, lurching houses, some with people still living in them, people doing their daily chores and burning their rubbish outside their doors (remember I said they had a massive problem with rubbish disposal?), pigs being chased along the roads, bus stops hanging precipitously over the sea and shouting singing and many balloons. Then the sea and more sea and sky, the wind blowing lustily in my face and straggles of hair getting in my eyes while the engine of the bike changed gears from time to time, me laughing for the sheer joy of it all like a child. The joy of being alive.

Back at the Hotel and Preparations for the Ferry in the Morning.

Then suddenly after an hour of mad hectic riding we were back. I said goodbye to my lovely driver and his trusty steed then went for a noodly and eggy lunch before jumping into the beautiful sea once more for old times sake. This speedy visit to Oslob had been so wonderful and eye opening that it has changed my life. Being so close to those magnificent beasts opened up an ancient part of my mind and shed some light there. It encouraged me to make another distant and difficult trip to a Rehabilitation Centre in Borneo which, I would discover, reinforced my realisation that we need to offer something to the natives of a place struggling on the edge of poverty, another way to support their families and once again go back to their roots of loving and caring for other creatures. I know how poncey that sounds and easy for me to say but I have been putting back into this ethos since I started this more exotic travelling.

So just the packing and gazing over the sea, a cold shower and a colder beer then it was already time to say goodbye to Oslob.

OVER AND OUT FROM THE BRAVE EXPLORER!