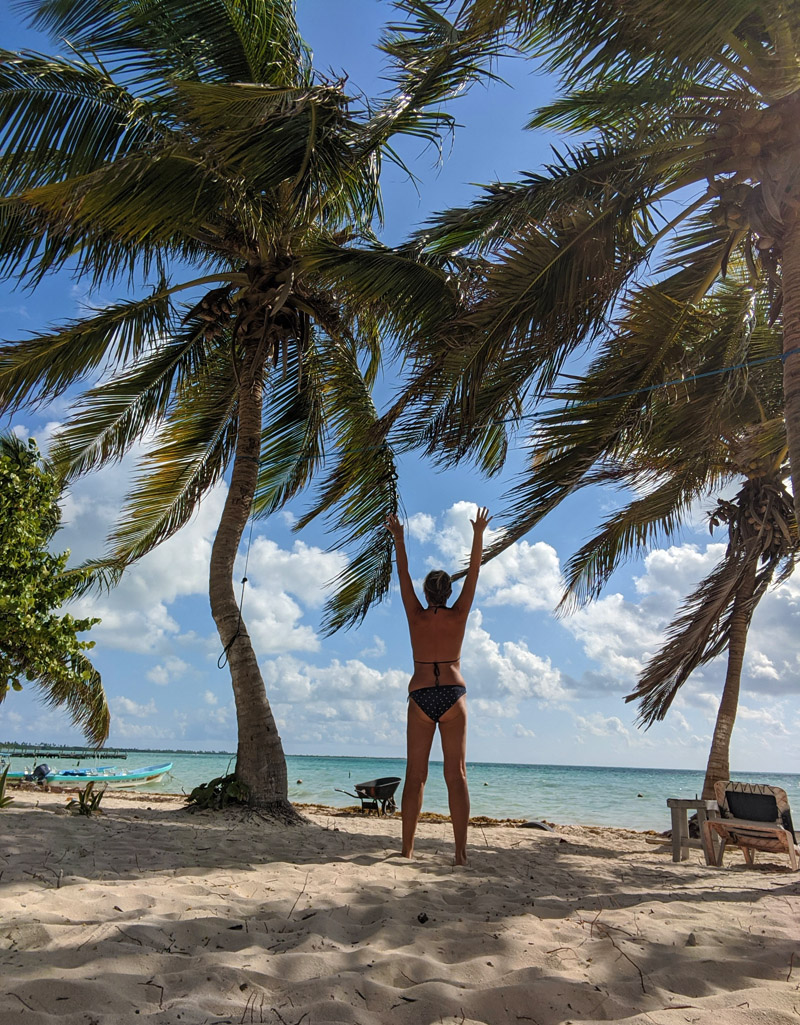 OR, HEAVEN ON EARTH BIOSPHERE OF SIAN KA’AN MEXICO.

Alert: This was posted a year ago. I am now very homesick for my Punta Allen family (in Mexico) especially swimming dog and Sonia. Although I have been considering this idyllic notion of buying a super cheap farm in the hinterlands of Bulgaria. (Of growing my own organic food and storing it in one of the outhouses. Building my own kiln in the garden and creating beautiful ceramic pieces while having the company of the like minded around me when needed.), I am now just terribly miserable without that PA environment and lifestyle. So this is for everyone who is feeling a little blue at the moment to brighten up your day with my first exploration of PA with my broken hand limply cradled in my arms.

Pain throughout the night. I had definitely set back my recovery but what to do? More painkillers and sedatives, a tormented sleep only to get up to open the windows in the night after the AC went off.

When I staggered out of my room in the morning the beauty of the place really dawned on me I had only seen the little twinkling lights the night before and it all looked disconnected and really quite scary.

Punta Allen is an unspoilt village with only very transient tourists passing through. It’s a fishing village and an amazing microcosm. I presume they have been hit by these times but I doubt people really stay here it’s more for the fishing and visiting the Biosphere Sian Ka’an where they have a huge variety of flora and fauna including jaguars if you’re very lucky. It’s at the end of the Boca Paila Peninsula. On that fifty km of rough dirt track down there, live around 500 salty souls.

Arriving at family hotel was a stroke of the best luck. It’s such a beautiful place and is appointed twenty paces from the white beach front. David the owner and Sonia have taken good care of me which would never have happened in the more impersonal places here. I was in poor shape but I extended my stay because, well, I felt as if this was the place to recuperate both body and soul. I didn’t want to leave and the huge bonus of love from the doggy too has really made the difference between just having a place to rest your head, and having a caring sort of family. They have massage here and a kayak if you fancy going out on the crazy beautiful aquamarine sea. Indeed someone said in a review that the massage was ‘magical, cosmic and ancestral’. Can’t really get a better review! I just wanted to tell you about this place because sometimes in life, and especially when you’re a damaged old bird travelling solo, you need the milk of human kindness. Sonia also will also cook some tasty food if you preorder.

The first day was very dreamlike. Not only was this place a paradise but I still had a cocktail of pills in my system so it really was far out man. After breakfast, I had a wander up the beach very slowly, and then clambered up to a beach bar and then onto the sand road the main street of the village. Some little restaurants a cop shop and tour offices and then boom! I was back at my hotel again. It’s tiny here and perfect for me to chill out and recover from my hideous accident. I decided to stay extra time so fitted in a dreaded tour which turned out to be great, only five of us including the captain onboard and a trip around the lagoon, off to the reef to see their very big turtles, then on to snorkelling and a high-speed chase to see the fin of one dolphin. It didn’t rock my world but I did manage to get in the water for a quick look and my god they have a lot of different species of fish here.

We are close to Belize but the fish seemed very different, indeed I ate a very fine snapper fillet yesterday. They wrap it in banana leaves and foil and just put slices of onion and tomato and butter in it! Somehow I never equated butter with here but that’s the way rock. I have already chosen my fish for today. The owner had me wait while he picked up from the fisherman a big bucket of big fish. My sleeping is better now. Bandage off now and I leave the windows open all night to allow the sound of the waves and that cool salty breeze to permeate. On my second day, I went down to my favourite place called ‘Just Be Fucking Nice’, and joy, bacon. It’s sad to say I have indulged in the pig since being in Mexico after a year of abstinence. The porky taste has been a boost to all my healthy and much more humane food. I will cut it again after this trip.

I have visited the Fisherman for a cocktail and surprisingly good garlicky chicken and chips and had a ceviche at another place and a burrito but I think it’s very basic food here which is its only drawback. I visited their bigger store here and stood outside a chained entrance to get some fags from a heavily masked youth who was and is strangely hostile, yes it happens even here. There is another small store where they are lovely. I bought a very antiquated brush and comb set and we laughed when I said it felt like a dog brush so was perfect for me. I also espied a bottle of eau de cologne I recognised as loving when I lived in Barcelona. I remembered its citrus freshness. Of course I’ve had to go back to the bigger supermarket, as he’s the only one who sells wine in town dammit.The cologne was by the way the wrong one, it was the mans one that smells strangely of old cigars which won’t be used except under my armpits as a kind of pungent deodorant.

The town people are charming and now sort of getting used to me so I have to be a good girl as I’m coming back. My normally acerbic comments will have to be made later

The electric rule is very humbling and reminded me of Banuken the remote island I travelled to in Indonesia. True places have their own generators but usually they charge extra and they are loathe to put them on. They are loud though so frankly sticking to the main hours from their local plant is better and in a way settles you into a more simple way of life. It retrains you to not be so bloody needy and maybe is a good preparation for if the grids were ever to fail.

I’ve slipped into this lifestyle amazingly easily. Usually I’m a restless beast but the week of healing here has taught me how to chill. True the first three days it was mostly on painkillers but since then it’s just become a way of life. A little gossip, swimming with my doggy Alkida, beer o’clock, lie down, local shop to snarl at the rude shopkeeper while getting Amy provisions, walk on beach, lie down, write blog and edit photos, scratch my arse, talk to dogs, back into the sea, listen to audiobook, lie down, eat sumfing, play words with friends, have another shower lie down and scratch my arse again. Life is simple and I have morphed into a complete beach bum.

There are a lot of small restaurants come bars on the beachfront and the road behind but if you fancy fresh fish cooked beautifully Taco Loco is superb. I had various fish filleted and steamed in banana leaf and foil with just thin slices of tomatoes and onions and butter. They open it theatrically  and the beautiful steamy aroma assaults your nostrils. Its delicate flavour and firm fresh flakiness shows its freshness and it’s combined with side plates of rice and or chips and veg or salad. I ran out of money so will have to go back on my return and try the whole baked red mullet of which I am very partial. The Cuban style music completes this island vibe. I would suggest over the road at the very aptly named ‘Be Fucking Nice’ for excellent coffee and bacon and egg breakfast.

Then last night a group of four solo travelling bandidos arrived. They had all met by accident and many tales were to be told and my first party was had. Sadly they have just left but one girl is living in her own place in Tulum and finding it challenging as do I now. I will now have a pal there and also can come down here to break up the vibe.The only man was hysterical as were the other two girls It was like I had cherry picked the best group of pals for the night. Diverse and clever, beautiful and funny. We all yacked on, drank and smoked, then finally went and laid down on some sun-loungers on the beachside, and gazed at the stars. They shone through so bright and clear, bar a couple of clouds, it was a feeling of wonder and sudden fierce happiness that had been lacking thus far. And yes today I have a hangover they just left much hugging was done and I will see my pal in Tulum Wednesday after her application for a spin class job. I feel all this is a new episode of my ‘Escape to Mexico in the times of Global Tyranny’ experience.

When I come back I’m bringing tea and some extra bits of different food not available in the village to be a very happy old bird. I can use the kitchen here so will be able from time to time to fix myself some pastas and alternative foods because although I love the food here I do like a bit of European shit too. I have a yearning for some ribeye with a pepper sauce or a very garlicky cheesy pasta. You can take the girl out of the UK…..

I’m so sad to be leaving even if for only a few days. This place really is a small paradise and I would recommend highly you make the effort to come down here if you’re ever in the area and chill for a few days. The cool breeze makes it ideal to actually enjoy the beach and just gaze out at that aquamarine sea.

OVER AND OUT FROM A BEACH BUM X