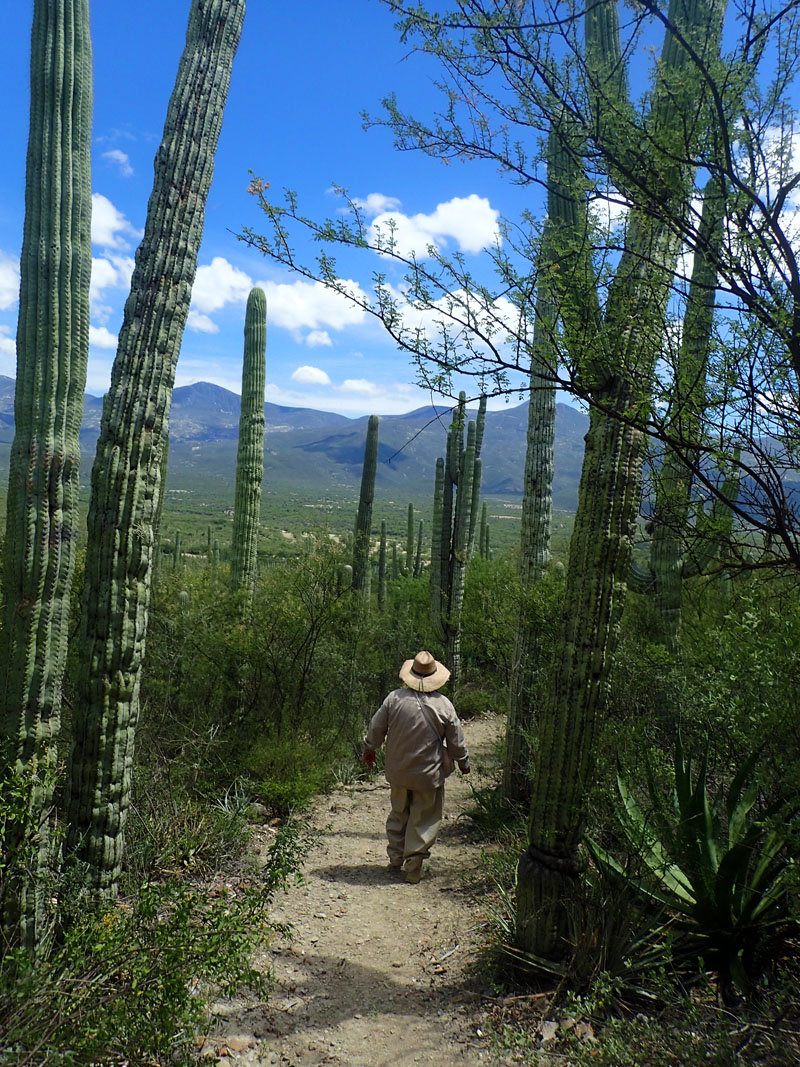 OR THE OLD BIRD GETS PUSHED TO HER LIMITS BY GOING UP AND DOWN SHEER MOUNTAIN TRACKS .

I arrived in Tehuacán exhausted and burnt out and had done nothing for days once I found the museums and site which I specifically travelled here for were all closed. I had allowed myself a meltdown, a collapse if you will. I had stayed in my room just sneaking out for food and drinks. I was absolutely broken. Then as usual, I shook myself down and got myself a sort of improvised tour.

Reception told me that the guide knew the area well and just because the gardens were closed there were plenty of other paths with exactly the same types of flora. The botanical gardens were just a more tarted up area of the same old, same old. As it transpired they were right so I got myself a bus and headed out of town to Zapotitlan. As soon as I got on that bus I was straight back into adventure mode, my agoraphobia melted and I was ready for action. The bus driver dumped me at the edge of the road and I walked back to the Zapotitlan letters in a mist of fine powder and exhaust smoke.

To my surprise the white car there was not my rendezvous, but an oldish geezer with a motorbike and a botanical gardens uniform came up and greeted me instead. I was peeved and he just said it was economical and that was that. He spoke no English and kept on about cabinas that you can rent in the prehistoric cactus hinterland and how many tourists came here. I was miffed as he zoomed off with me to show me all the bloody things I didn’t want to see.

Zapotitlán means ‘Victorious, winning and invincible Lord’ and Salinas added for the salt flats. A wonderful place that is a cactus wilderness and produces salt as it’s main product. Full of minerals you can salt your cactus flower lunch with it and have a side of salted lemony worms. And the onyx oh my god the huge slabs you see on the roadside. The iconic cacti and elephant foot trees straight from a Mexican Western really are amazing and ancient. I wish I could have stayed the night to see the stars there which apparently is mind-blowing.

When we got to the centre of the little town and its church I got my camera out of my bag put the wristband on so I could take photos going along and told him firmly some terms and conditions of what I wanted from this and not what he was improvising wildly. I didn’t want him to speak unless it was something about the cacti, history or the Salinas, or salt flats, I didn’t want a fucking time share. Ground rules set things became much better. Where we walked was his ancestral grounds that his family had owned for at least the last six generations. He showed me a few herbs and there was an outstanding oregano sniffed at, along with another couple of herbal medicines.

He showed me his little shack where he writes each evening and has tourists there sometimes staying the night sitting round a campfire drinking mescal and smoking joints. I looked at a mountain of empty cans and rubbish and said rather sniffily ‘yes I can see that’. As I was taking some photos he went round the corner ahead of me and as I caught up I saw he had got his conch out. He was very proud of it and proceeded to blow it gustily and the horn like sound echoed through the valley.

Yeah, I know there’s a lot of double entendre there, ooh matron. It was a strange thing to have sprung on you though, and bless him, he carried on for a few more times. In this prehistoric setting of primitive flora it actually was all quite beautiful.

Next stop the much anticipated Salinas. Well toot my bloody horn I wasn’t allowed to look at the salt flats that were by the road, I had to go on the bike, to distant ones, down a twisting slippery shale track that had the additional danger of having a gulley in the middle from torrential floods. A sheer drop to the side made for the perfect storm. My vertigo and the obvious bloody danger of it were not pacified by him saying we just will go slowly. He said he had done this many times before, I didn’t really believe him.

The Mexicans always say this. It’s like their favourite thing to say at the pyramids too. If you go slowly it will be fine. Well yes there is less chance of an accident but this does not actually stop that back wheel slipping on a slate or you catching the toe of your shoe on something for you to plummet to your death. I’m not mollified by these things the only plus sign in this situation was, that we both would do the plummeting.

The weather had turned a bit but the man and his sons who worked and lived there were repairing some damage the previous nights rain had done to their carefully tended rectangles of evaporating salt water. They have many caves in that area and the ones around this spring turned salt flats had been converted many moons ago for dwellings for the people who tended this resource. Such a strange place to live, that must be haunting on a moonlit night with this ghostly patchwork of reflection, looking like an exotic alien planet.

Going back up the mountain was much less scary than down. I have learnt this on many occasions while travelling. In Cambodia I forced myself to climb up the tall narrow steps of a temple only to find I could not possibly go down again and it was only when I was told there was a staircase with a railing that I stopped having a dreadful vertiginous panic attack. I had comforted myself with this theory while fretting about going back up the mountain.

Anyhow we struggled up the winding track and made it back to his restaurant of choice for a beer for me, (much needed) and I chose the prawn and cactus flower stew thingy. It was actually very good, the buds having a slippery exterior and a crunch when you bit into them. However it was time to get going and as I stood at the side on this sweltering mountain road I reflected on that cactus jungle and that conch shell of Armando’s. The mining of onyx, and those salt pans with pink and blue and green hues evaporating in the sun. Seeing a stray collectivo I grabbed that instead of the bus, it was even cheaper and had air con. Bliss.

Alert: This is being finished rather hurriedly in Tulum. I decided I really must leave and get back to Tulum and be near the airport of Cancun and have some normality back. However I decided to bus it all without stopping. Oh dear what a nightmare. Thirty two hours on the road. A gruelling and never to be done again journey. Think I’ve been pushing the envelope too much, always looking over my shoulder at the new global order as it snaps at my ankles, a cadaverous beast that soon will halt this travelling and exploring. Thankyou Mexico for what could be my last trip.

OVER AND OUT FROM THE BIKER BIRD.