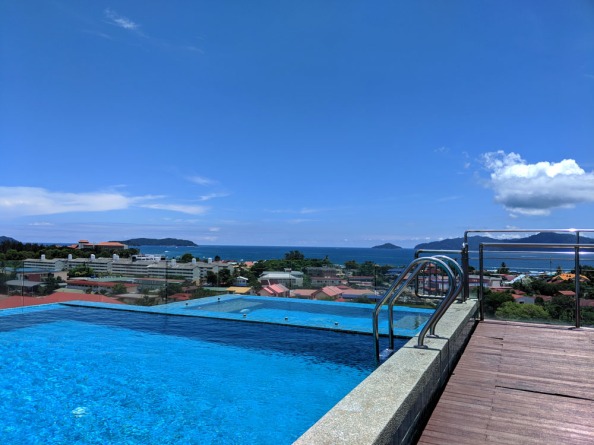 OR TA TA TAAL AND KK ARE YOU OK.K?

The morning after the night before.

As I dragged my weary body out for my usual breakfast on my terrace I pondered volcano (magnificent) and my night of the living dead (monstrous karaoke) then went on a lakeside walk. It’s a really beautiful place I must say and always surprises. As I went round the corner another straggly village appeared and with it a clutch of vintage trucks that had been immaculately refurbished. With their shiny chrome and bright colours they gave it a kind of Cuban atmosphere. One called “lady Maribel” looked a little less smart than the others whizzing by. It did say ‘police’ in the windscreen but hey who knows here in Baracas, it’s a little loco. I did see one that seemed to be a bus too but who knows, it adds a lot of character to the place

Walking further I saw tanks jam packed with tilapia. They were sort of tilapia hell, where you go if you’ve been a very bad tilapia before being roasted on a BBQ, a tilapia purgatory if you will. Now I’ve never liked them to eat, not keen on freshwater fish, but holding them in they hugely overcrowded tanks was just disgusting.

Alert: Now I’ve just read they are very bad for your health anyhow containing dioxin which is linked to the onset and progression of cancer and other serious health problems and other chemicals which cause inflammation and weaken the immune system. Along with 35 other species of fish it is now being genetically engineered. The greed of humankind knows no limits! Constantly interfering with nature the scientists, tech firms, politicians and super rich are generally narcissistic and have a God Complex. These people in power prove themselves sociopaths at the very least, and psychopaths at worse. Many examples can be shown in history and the list is impressive, but for what is happening now its global and terrifying.

There were a plethora of dodgy shops and trestle tables drying god knows what on them and shady yards with old cola and sprite bottles of home made hooch. (No I did not partake) It was only 10.30 and I spotted what looked to be a nice bar to rest and get a cool drink. As soon as I sat down the smile froze on my face, I was next to a speaker and they turned on the first eardrum splitting music for my pleasure. The waiter smiled, I didn’t and went running from the deafening music. Rushing past tiny chapels and odd bus shelters I ran in the sun. The new day of Dante’s Inferno had begun.

Arriving back at the guest house I had my last adobe chicken and icy beers and paid my very reasonable bill. (9,320 pesos about £130 at the time) It had been a love hate relationship here but fascinating to see this really weird side to Filipinos up close and dirty, but also that lake, that volcano, those gardens, so beautiful.

I wonder if that guest house is still there after last years eruption? I do hope so.

Back to Manila for the Last Time.

My driver arrived looking pale, I think he was a closet karaoke man, and off we zoomed to a very good airport hotel in Aseana City Manila. The Hop Inn Hotels are cheap, no frills and delightfully clean and sort of neutral. That part of Asia does these very well with this formula and frankly they are always good for a punt. This one was in a lovely clean new area of the city outside downtown Manila where two weeks previously I had dramatically entered Manila and the Philippines.

Blissful sleeping, soft bed crisp sheets and fluffy pillows. A proper shower not a hosepipe. Clean hair and moisturised body, quiet oh so quiet. A perfect way to rest and replenish for my flight to Kota Kinabalu, Borneo. My place to search out the Orangutan Rehabilitation Centre in Sepilok but first KK and all it had to offer. From Catholic to Muslim in one hit. The excitement of fresh adventure. I was on the road again.

OR SALAMAT (THANKYOU) PHILIPPINES, YOU WERE CRAZY AND SPLENDID. PALAAM (GOODBYE) TILL NEXT TIME. I WILL COME BACK TO YOU SWEET TOOTHED KIND AND WARM PEOPLE!

The Ninoy Aquino Airport was super clean and super quiet for my early start. As usual I was sad to leave and a little apprehensive about this new destination ( I had been forced into this decision if you remember when I had been told I had to have proof of outward travel, POOT when entering the Philippines) I hadn’t expected to go to this exotic sounding place. The flight was great and we landed on time and still quite early. The taxi took just fifteen minutes to my lovely hotel, the C’haya. Now this little gem has a pool on the roof with a bar and a 360 degree panorama. I sat there in a sweaty heap while my room was being prepared and got the lowdown from a couple of guests of the merit of ‘KK’ as it is trendily called. It seemed there was much to do in this place and I sipped an icy beer in my usual way and gazed at the sea with islands here and there breaking its surface. It was a chill pill experience and I was really happy to be here.

Room ready, I slung my stuff in and went just round the corner to a super cheap restaurant for an early lunch. The flavours had shifted from the ever sweet things in the Philippines (except for that glorious adobe by the lake) to hot spicy noodles in a broth. It was so tasty and I would find all the cuisine, from humble to extravagant, delicious there.

Next door was a KFC where deaf people worked on some government scheme that integrated people with handicaps, and gave them jobs. I gazed on fascinated at this novel concept that the locals were totally used to. I sauntered off next to an overcrammed Borneo ‘supermarket’. This is a special beast that crams every item you might ever need into a relatively small space but with laden shelves up to the ceiling. I needed provisions; toiletries, beer and snacks, and this was the place. It all was becoming very surreal in my fatigued state. I needed back to the hotel with my bag of goodies, to have a little swim and a siesta.

All I did for the rest of the day was my housekeeping. Washing clothes, checking emails, painting my nails, face pack (thank you weird supermarket) and writing my journal. Then the charging of all my bits, downloading stuff from my Tough camera to clear space so I could take it snorkelling, and finally having a cup of tea, a biscuit and a read.

I had made an itinerary for the next day so later took a somewhat nervy stroll along a very long highway to a park that I was told was amazing. Well it just had some water features and was ready to close by the time I got there. It had looked deceptively close on the map but only one set of gates were open. The park was very average but apparently they light up the fountains and are open late some nights, there was a group of young guys lurking so I walked quick smart back, seeing for the first time an amazing pink sky that they have only so vibrant in Borneo. Then it was round the corner from the hotel for a bit of Chinese, then up to the pool for a cocktail at the roof bar then happily to bed. Night night.

I was going to love Sabah.

OVER AND OUT FROM REBECCA AND I’M OK.K.

My links for my life! Writing, travel, sculpture, ceramics, films, photography and modelling.

My Channel You Tube