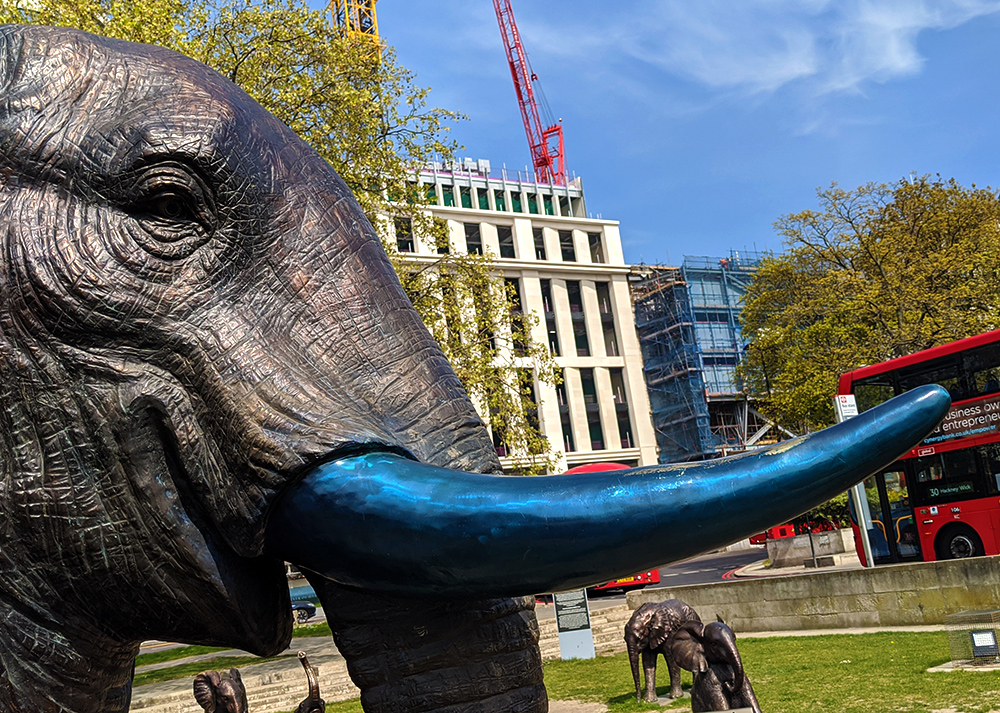 OR, HAPPINESS IN LONDON AND ELEPHANTS AROUND THE WORLD

I have to say that elephants are one of the best loved creatures for both adults and children. And when you go eye to eye with one as I did in Thailand- I even kissed it- you realise that somehow they know more than you about most things. With their ridiculously long eyelashes and wise ancient eyes they hypnotised me and I have never surfaced from the trance. This sounds like an exaggeration but I assure you it’s not.

In Thailand I have been very up close and personal with the Asian elephants at a rehabilitation centre just outside of Chiang Mai.

I arrived with a small group (they don’t allow large groups there), and was a little spooked at first by the talk we had for health and safety. Apparently you shouldn’t stand very close to their sides as they can suddenly tire of you and turn standing on your foot by accident (they don’t deliberately stamp on human feet) The bags of sugar cane that you feed to them by hand should be replenished quickly as they try to nick from your food bag which alarms some people. They like a good scratching but just don’t get fresh and touch their ears. Their wardens are there for the security and to make sure some idiot doesn’t take the piss. After feeding enough they will want to go for a good old splash in the river so you get a scrubbing brush to clean them and a bucket to chuck water over their backs to cool them after such a hard day of being adored.

Going to the field, muggins here saw Mr big tusks making a beeline for me. Alarming though it was, I was in love. ‘What big tusks you have’ I thought but as he gently bullied me for the cane I relaxed totally, this giant was incredible. My alone time with Mr Big was rudely interrupted by a young guy who having seen that I hadn’t been mauled, came over. Now I might sound verging on the smug, but all those noughties had cast their eyes aside and gone fed the smaller ones and now this bloke had come over aggrieved that an old bird had stood her ground and not been nervy, he was a little ego bruised so was a little over the top with his petting. I sighed but hey those big tusks really are a penis extension for inadequate men I suppose.

After a while of meeting them and feeding them they started to get more picky about the quality of the cane you were proffering. The tough bits were simply not good enough and they would rummage in your bag for more tender shoots. Of course it was enough! They were ready for that cooling river water and knew their timetable perfectly. Bath time!

Now we had to stand back as they followed each other into the rather muddy looking river, as obviously they were stopping for nobody and nothing.

The entrance into the water was enjoyed by elephants and keepers too. They dived into the water and went play with their charges until reluctantly they let us go in too. After a little hesitation about how dirty the water looked, I shrugged it off and went to scrub the now very frisky elephants. Inhaling the water in their huge trunks and swinging those trunks over their shoulders to cool their backs caused much shrieking and laughter among the human participants. All of us were soaked and behaving like little children. (I know I say that a lot but the pleasure of travelling is that you can be a child again as well as a lot of other things!)

At five o’clock on the nose, they turned away from us and ambled in their very baggy trousers way, off to their forest behind the sanctuary. Their nine to five day with humans was over and they wandered away without a backward glance to go do elephanty things and have a kip.

Top Tip: Never book anything that is a place where they have elephant rides and make sure that you tell the booking office that you disapprove of this. These animals are bullied and harangued into this ignoble tourist activity. As for all these trips make sure it’s a humane and even better a rehabilitation centre where you can enjoy these beautiful beasts with no guilt. This of course goes for any visits to see animals. In Borneo I went to their rehab centre and I was so glad I made the extra effort to get there.

London and the Gillie and Marc expo “Elephants of Tomorrow”

So you can imagine in the middle of the chaos of this plague, when I was walking the streets of London every day, the emotion I felt when I found a herd of them up at Marble Arch. These magnificent bronze sculptures were modelled on various rescue elephants and each have their names and a brief history of their misery before being rescued. This so surprised me it brought me to tears, standing there amongst them, almost completely alone in this city without humans. The apocalypse scenario and I was walking with these giants? It was truly bizarre and surreal.

As I wandered around these twenty one life sized chaps I felt a much needed soothing of my soul, at the same time the horror of the dreadful time all elephants of the world have suffered by the hand of man. The African elephant I have only seen at London Zoo ages ago as I don’t visit any zoos anymore.

However it was a lovely surprise for me after my long walk through a deserted Mayfair and a solitary amble through Hyde Park. I have been alone through all this catastrophe and have been out every day but the toll of not being able to go to museums and galleries was genuinely the thing that had floored me. Here I had animals and art!

It is said that by 2040 these animals could be extinct (indeed it would seem so could the human race) and we still have to focus, amidst this turmoil, on saving this planet and it’s incredible flora and fauna. As an old bird who wishes to spread her wings again as soon as possible, I am looking to see if there is anything possible to do in the future, a way to be more proactive than just giving money and hoping for the best. I wonder what has been happening to all the creatures who were being protected to a point up until this new madness.

Wherever you go you see elephants in Asia, it’s their thing. Apart from the religious aspect they have been loved and cruelly exploited, but for our reasons here I am showing you the more beautiful side of their treatment through history in art.

So many elephants so little time! I’ll add to this later!!!

OVER AND OUT FROM THE KISSER OF ELEPHANTS