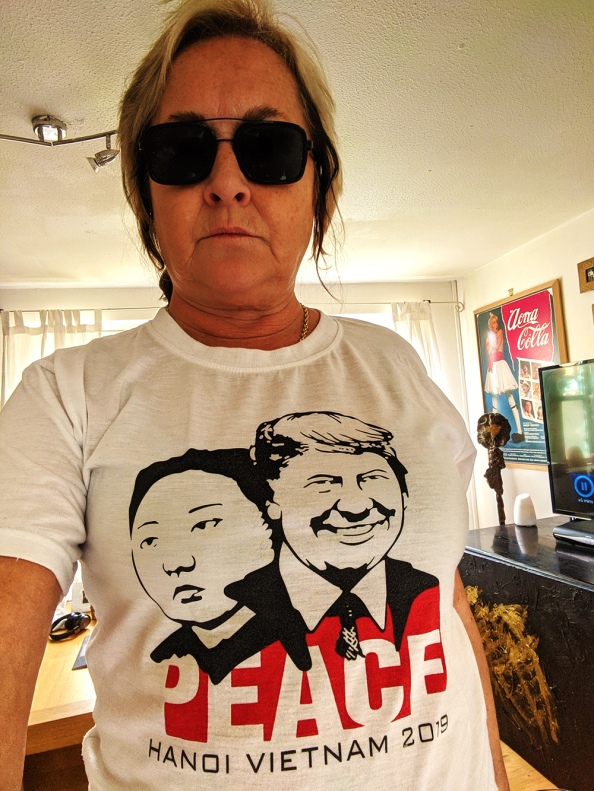 OR YOU NEVER BLOODY LEARN REBECCA, YOU HATE TOURS!

I know that’s not a very catchy name for a song but it turned out to be a BIG time in Hanoi with a big meeting tween Donald Trump and Kim Jong-un. (fondly known as Kim.) Apparently Trump wanted to give Kim a copy of “Rocket Man” but was dissuaded. More on that later.

Yes I know it’s not like me but fatigue and a terrible ennui had stripped me of any common sense. Also the havoc and mad frenzy of Hanoi’s beep beep beep confused and rattled me to a point I felt a little hysterical. Still brainwashed by China, and the tour thing impressed on my brain, I went to my nearest travel shop out of the millions there touting for business (also very confusing, I’ve never been good with too much choice it gets me all giddy and panicky) and sealed my terrible fate.

TOP TIP: Never feel rushed like this, go to a quiet dark corner and plan properly. Those agents would sell their grannies for a commission. I had a two week visa and worried that the time would be swallowed up if I didn’t get my skates on. I thought when the bus arrived nice and early and lulled me into a false sense of security, maybe I had been harsh. I would just sit back and let them do all the hard work of getting there, the overnight boat embarkation, and all the horrible bits that can go wrong. I would just be a slug and enjoy. NO! Just don’t do it.

Yes well it don’t work that way. I was only the second pickup and their were scattered hotels with other boggy eyed anxious people waiting for the bus.Then there was the road closures for Trumps arrival and two missing punters that we had to find. Cramped and already bored shitless I huffed and puffed. Now we had to travel on this little bus for four hours with only one break. we had already wasted one hour and some people were already whining for a toilet.The journey dragged and the skies were grey and it all felt terribly depressing. We all were grim and it was super lucky that I met Janet and John, a lovely English couple who I could join in a good moaning session throughout the trip. I loved them.

There was a huge milling crowd of tourists at the quay which compounded my suspicions. There are hundreds of these tour boats around Halong and the photos in the tour magazines must be from the turn of the century as it’s nothing like those idyllic pictures. We finally boarded our junk and were allotted rooms. I loved my room which was just by the restaurant and bar. I’m an idiot. It was so pretty and quaint if a little faded. This and the astroturfed top deck would be fantastic for sunbathing and having a cocktail watching the sunset. Surely the sun was breaking through?

Eager relieved faces gobbled beers and chatted as we tried to relax a bit after the cramped bus ride, but no, this is not how a tour works.

Achtung achtung, lunch now. The tour guide who seemed so gentle at the beginning had gone into a bullyish mode. “Quickly, quickly” he said to the stragglers who were still trying to enjoy the scenery. We went into the bright and airy dining area and a banquet arrived at our tables. Prawns hanging plumply from a large glass, clams, chicken, an odd cucumber salad that they had made sweet, piles of noodles and rice. A grand looking affair for our little three star boat. I felt a little apathetic but lovely Janet perked me up…this would be reciprocated over the next thirty six hours.

On to the top deck for the cruise. through these beautiful haunting islands jutting from the sea. We oohed and aahed sure that the sun would come out it was teasing us all so terribly!

Now there are 1,969 of these and they all are terribly similar. True you only get to see a very tiny percentage on el cheapo tours but they are all very samey. I think on a hot sunny day you wouldn’t give a monkeys and it would be fabulous, but may I suggest my friends don’t go in winter on a wet cloudy day. Legend has it that they were spat out by a protective dragon as jewels and jade to protect against China.In sun very precious jewels, in cloud not so much. However for the eerie drama and legend it was magical and there weren’t so many boats…..

……We turned a corner and living hell was entered. Huge groups of similar and slightly more fancy boats nestled into one area with islands around. Quite why they all have to be there was beyond me until the tour guide explained to me in a quiet moment that they preserved the rest from this feeding frenzy, and yes if you paid more you could get private or more expensive boats. If I had of known I would have definitely done that.

Anyhoo. As soon as we arrived we were marched onto a tender to see these “wonderful, beautiful” caves. I was startled. It was all so fast. Rushed over to the cave queue we all waited to climb the millions of steps to the cave that you had to shuffle around due to being so cramped. It was claustrophobic and not all that. I have been to many caves in my travels and although these were magnificent in their own right they were kinda beige. John has a weak heart so couldn’t go up as others with creaky chests or claustrophobia. They had to hang around waiting which if explained they could have done on their boats.

Caves done we were dragged off to some beach island to enjoy another climb for the view but you had to be back in half an hour. Pass. Then chop chop back to the boat for a lesson in making Vietnamese spring rolls. Pass. You only had to throw pre-cut veg, noodles and duck into rice paper and roll them up. Less of a lesson in cooking more in greed as the first few gannets scoffed all the duck. Dinner and more beers and bed I thought. The dinner was lunch re-hashed and the beers pricey (independent bar) so I thought I’d hit the hay and went to my ornate little room to write my journal. I was happy to have all the nagging over for the activities. I just needed a good sleep and then I’d be in a better mood and quit whining.

Wrong! The three Finnish guys wanted to partay and the bar was right next to my room. Suffice it to say that they partayed till two in the morning, telling obviously hilarious jokes most of the time raucously laughing from their big boomy lungs. At breakfast I was an arsehole.

Then more activities going to a pearl making factory then shop. Pass. (I stayed onboard I know that trick they mercilessly tried to flog pearl jewellery) then we returned for our bus-ride back to town. Janet and I by then were done with it all.

It was a shame but Hanoi suddenly was my jewel spat from that dragons mouth, when we arrived back in town. She had never looked so beautiful.

I had an early start for my flight to Nha Trang the next day….want to come with me and visit?